have been greatly exaggerated! There seems to be a tipping point, where I've been away from the blog just long enough that I feel like I need to reintroduce myself. Like I can't just jump into a story without catching up with you.

But then, the reason I haven't blogged is because I haven't really had anything worth saying. I've been on a summer break, after all, meaning that I have been largely, and gloriously off task. There has been spinning, and knitting, baking, gardening and such, but nothing really interesting to anyone else but me. 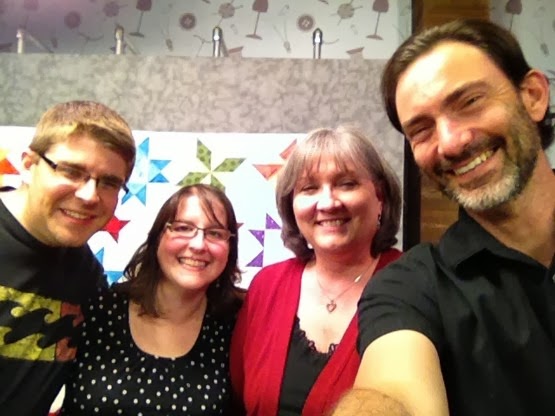 My summer off came to a screeching halt at the beginning of August. Craftsy accepted my proposal for a new class, and we set the taping date for September 15. Yikes. I had four weeks to prepare all the step-outs and make all the samples. I could have asked for a later shoot date, sure, but I figured I had nothing else pending, so why not? 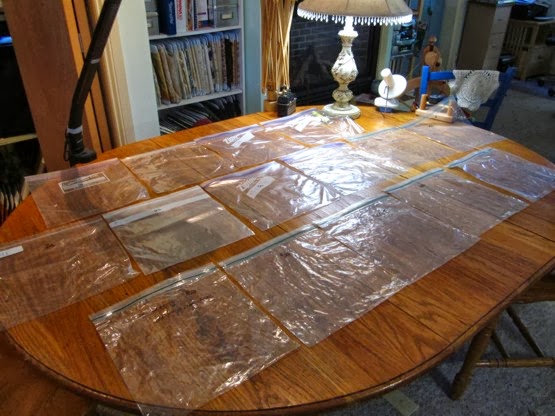 The first thing I did was get organized. Oh, how I love zip top bags. I really should buy stock. This was my starting point for the class project, but just about the time I had finished cutting up the background fabric, my editor suggested a more traditional layout for the quilt. Yikes again.

Despite a few (okay, maybe more than a few) anxious moments, the prep work was done in plenty of time, even a few days early! And, as before, my crew was totally top drawer! They have a marvelous way of soothing the fears of working in front of a camera. Thank you, Jeff, Linda and Rob for making me look so good!

I don't know yet when the class will air, and I can't really say exactly what it will cover (although you can see part of the main class project in the background). We are looking at late October, perhaps, but of course, this is subject to change.

In the coming days I will be catching you up on the other goings on here.There has been spinning and knitting, and a sewing revelation. And, in the following weeks/months I will be going on a UFO/WIP hunt. I have odds and ends of projects for publication, step outs, bits and parts. It's time to either finish up the project, or toss the lot. Or perhaps something in between.