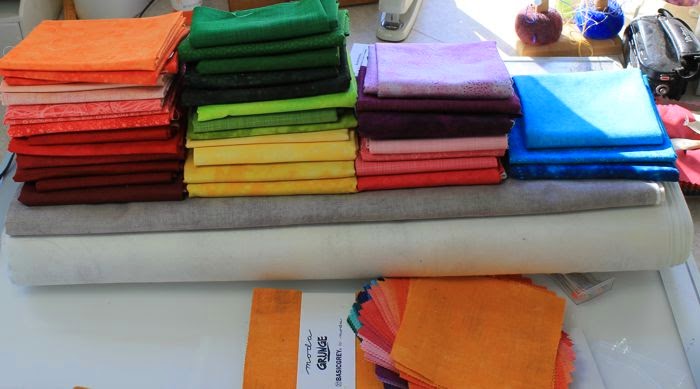 It's an old Yiddish saying. Man plans and God laughs. I started this year with a renewed creative drive. I had plans, such plans, of all the wonderful new stuff I would make and learn. Wanting to be more painterly in my applique design, I signed up for a beginning watercolor class. With the new quilt project's design nearly finalized, I started pulling fabrics. 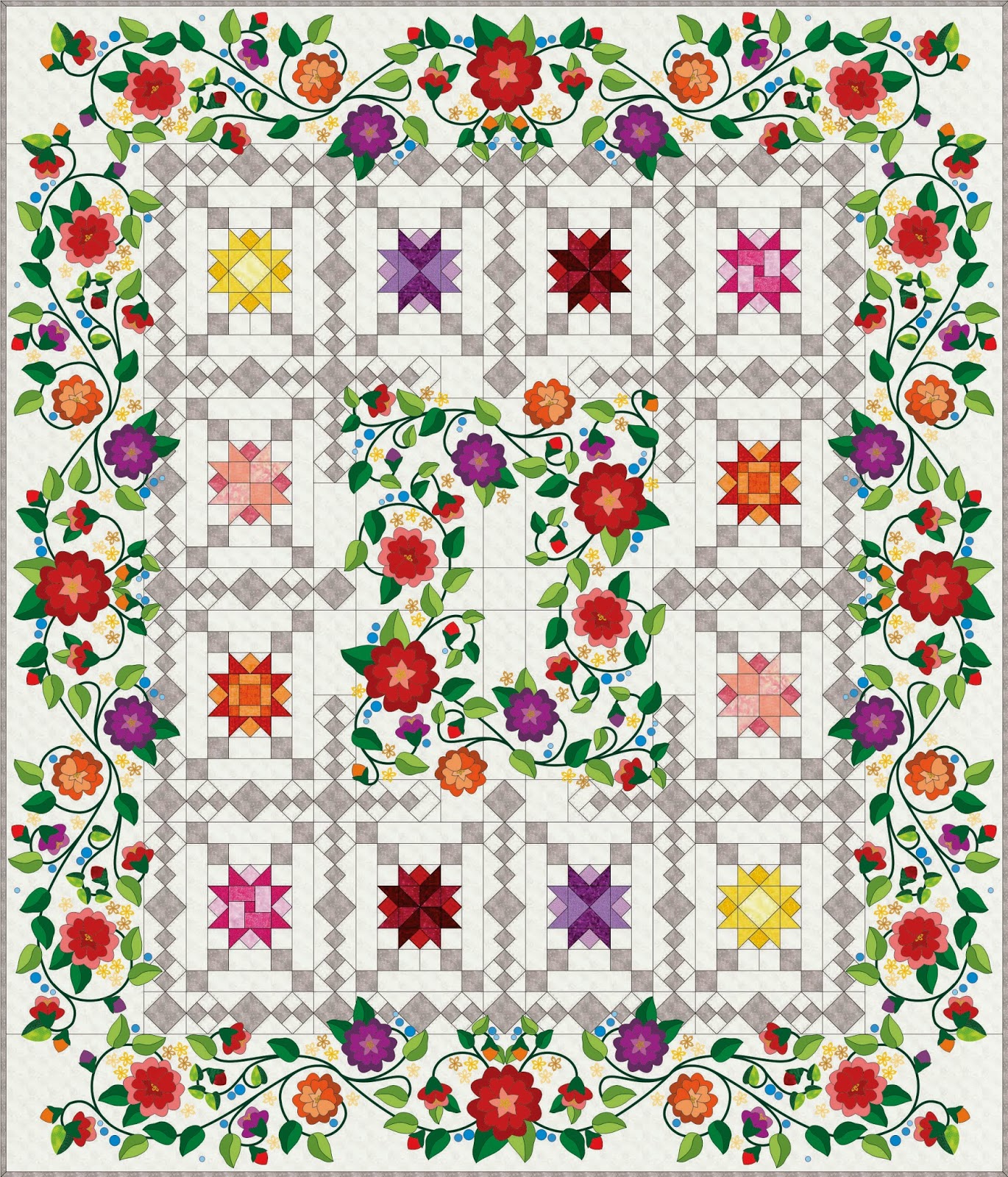 And then everything changed. Just like that. While it's too soon to go into details because we don't have any yet. We've been waiting for details any.day.now, for almost a month. No need to worry, it's nothing dire, just a big change, and one that will be very good when we've finally come through it.

So, here it is, my working plan for the new Block of the Month. I'm calling it "A Fine Romance" after one of my favorite songs, written by Dorothy Fields and Jerome Kern.

Some of you who have been around this old blog for a while might recognize the design as one briefly posted a couple of years ago. The piecing plan is pretty much the same, but the applique is all new. I've been wanting to do something all viney and curvy for a while, this project seemed to be the perfect place for it.

With all the uproar around me, it's been a challenge to make even the simplest decisions. For a while I was toying with having the flower colors be much more random, but I'm thinking now that I'm going to stay with the rhythm of the colors falling in their own place. What do you think? The colors in the design are just placeholders anyway, so maybe I'll just have to make a few and see what I like.

Yesterday I added a few more colors to the palette. It seemed to need a more lemony yellow and some citrus greens. Several of the fabrics are from Moda's Grunge line, including the light background. The soft gray for the background accent piecing is a Riley Blake Basic which has a very similar texture. It's taken me a while to settle on the gray. I wanted it to be there, but not there, you know. This gray has a little more presence than that, and I may end up using the back side, or even replace it. We'll see.

The timing for the release of the steps is totally up in the air, just like everything in my life right now. It may have to be two months between steps, or even catch as catch can until things are finally settled, which I understand could be any.day.now.

Wanna Cruise with me? 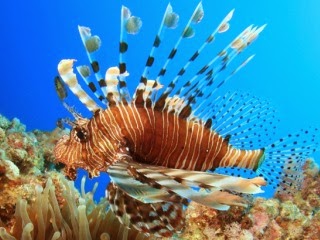 Warm, tropical beaches. Sunshine. Excellent food. As casual or formal as you please. And quilting!

I hope you'll join me on a cruise to the Eastern Caribbean next March 5-13, 2016 with Quilt Retreat at Sea. That's eight delightful days at sea, eight days to rest and reinvigorate without a care in the world.

My hubby and I love to cruise. It's like staying at a deluxe hotel that also takes us to exotic places. We always return to real life with renewed energy.

This marvelous beauty will take us from island to island. We will be sailing onboard Royal Caribbean’s innovative Independence of the Seas. She recently underwent a $7 million refurbishment. The new features include a Cupcake Shop, an Italian trattoria called Giovanni’s, new digital signage, bow-to-stern WiFi (fees apply) and a poolside movie screen.

On St. Kitts, we'll be visiting Caribelle Batiks, where we'll see first hand how some of our favorite quilting fabric is hand made.

For those days at sea I've designed charming little project that is full of fun techniques . It's a secret for now, but I'll be showing glimpses on the blog from time to time.

Click HERE to find out all you need to know to join us on this amazing tour. Spaces are limited, please check it out right away.
Posted by Beth Ferrier at 9:59 AM No comments:

A Change in Priorities 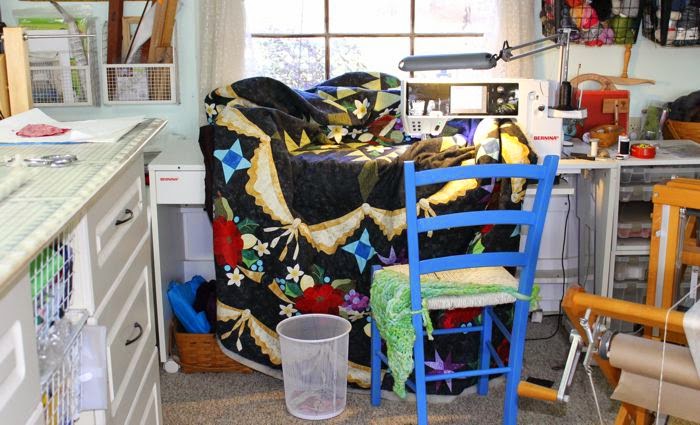 Just about seven months ago I rearranged the studio. Yeah, yeah, you all know how I like to sort things, and reorganize, but this time it was different. I took my beloved Bernina from her place of honor, front and center, and shoved her to the back wall of the studio. All to make way for my new obsession: weaving.

It made perfect sense at the time. Looms not only need floor space, but they also need enough room around them to handle the awkward task of warping. Plus, the light (and the view) is so much better on the other side of the studio, near all the windows. 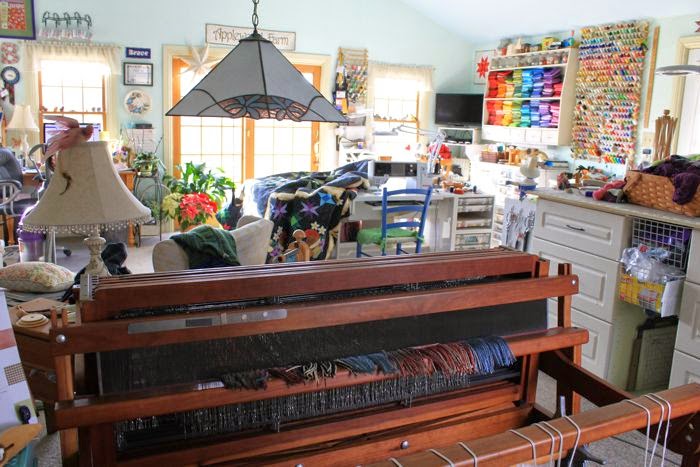 Yesterday we moved my sweetie back to front and center. I've decided to sell the smaller floor loom (the Baby Wolf) and move the larger loom to the back corner. Keeping the larger, heavier loom will allow me to make rugs from all the bolts of fabric I have, leftovers from kits and project work for fabric manufacturers. (I just adore my rainbow of fat quarters and thread.) 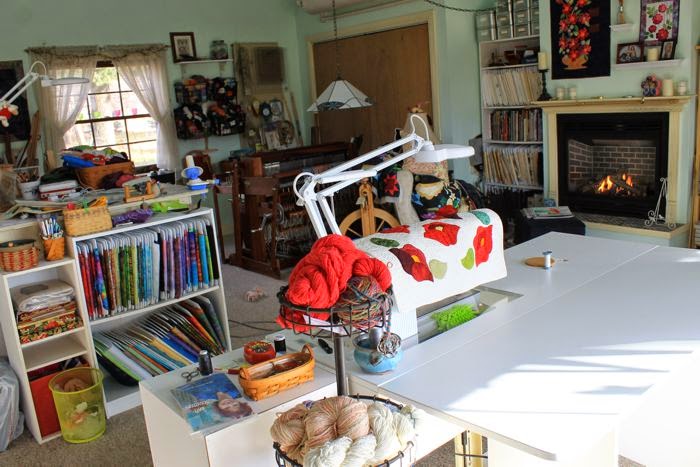 After all, I have work to do. I've set some goals for this year, and all of them include quilting! Since my applique book with C&T is out of print, I'll be writing a new one, which I will self publish. I have a project to design and make for the Caribbean Cruise that I'll be teaching on in 2015 (more information here, and coming soon to the blog.) I have a large quilt project I've been itching to do that may or may not become a block of the month (you'll help me decide, won't you?). 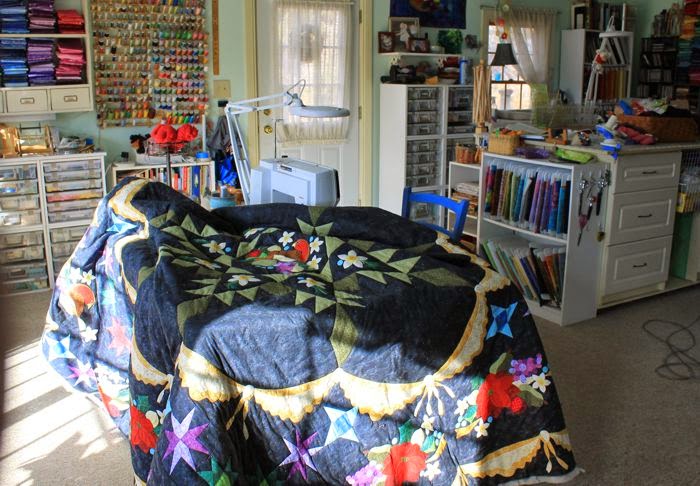 Plus, there's this quilt I need to finish, and heaven knows I'll need the space to work on it. (I've almost finished the ditch stitching, I'll have to figure out which fill stitches to use very soon. It's the hardest part for me, the deciding.)