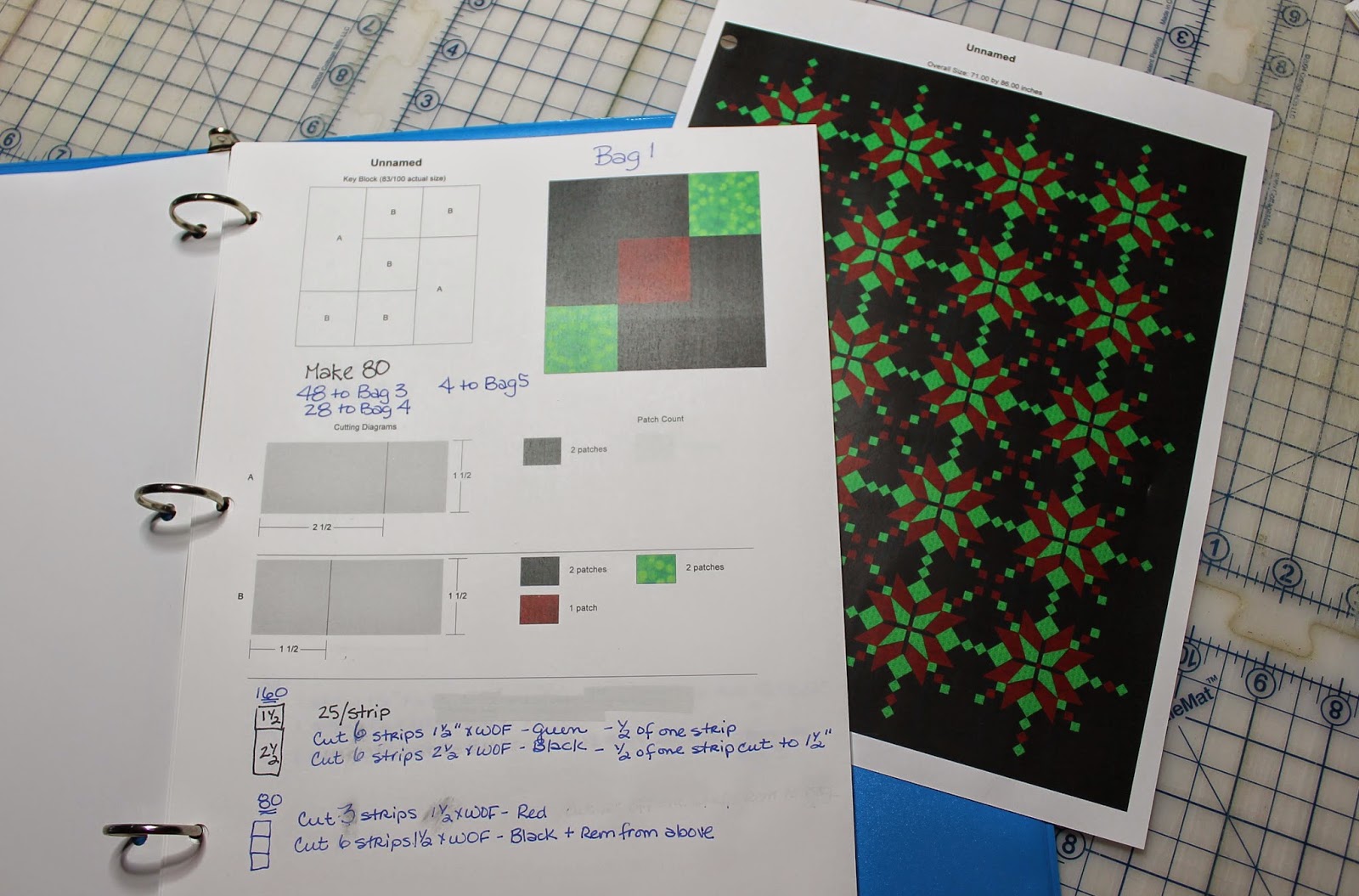 Two years ago, when my Sneaky Piecing Tricks book came out, as part of the promotion, I did a Take & Teach class at Quilt Market. I designed a nifty little twelve inch block to illustrate some of my favorite tips and tricks in the book. I really liked the block, and figured that I'd need to do something more with is someday. 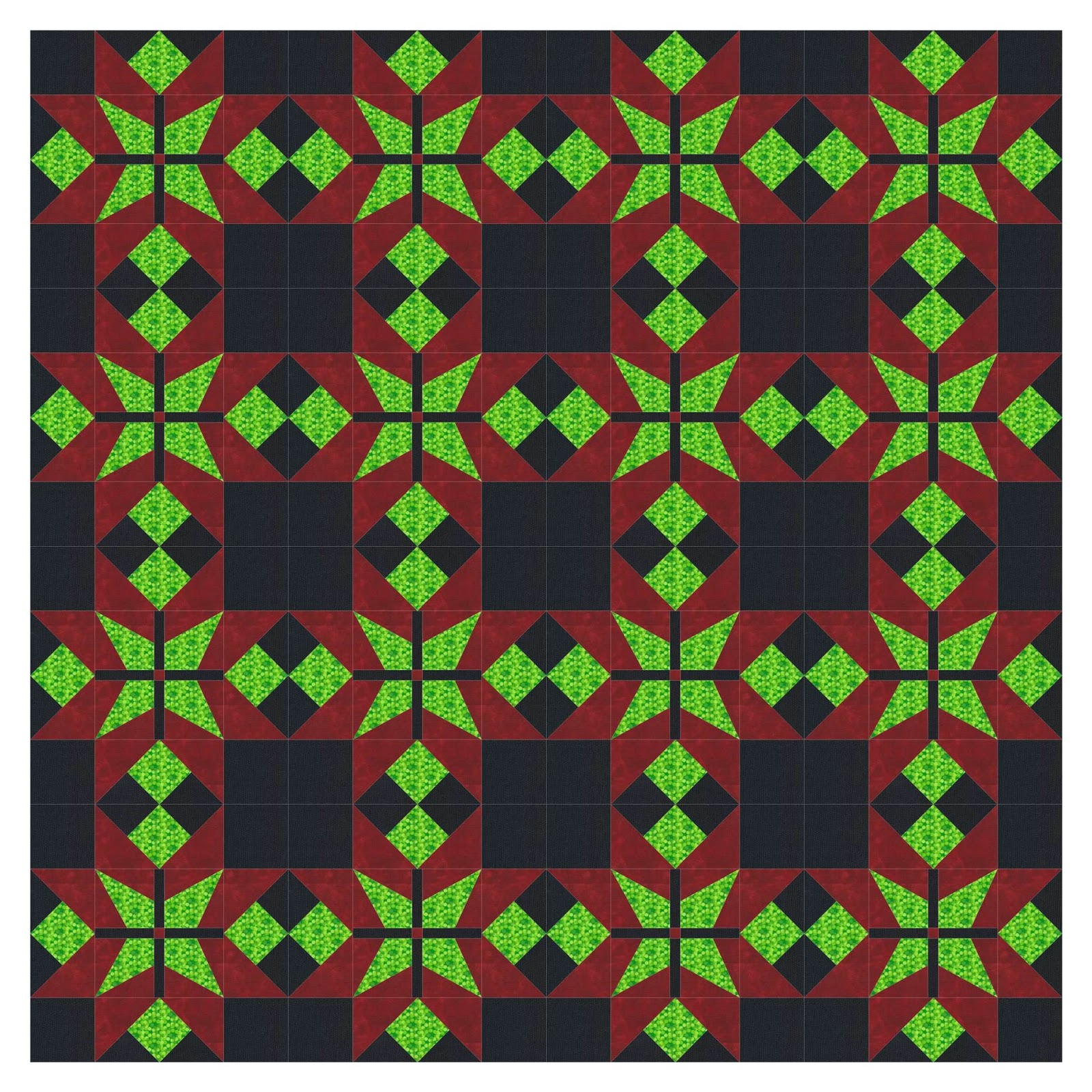 After several hours of noodling around on EQ7, I finally settled on a design. (Do you use Electric Quilt? I've been using it since it was a DOS program, pretty much since its beginning. It's addictive fun.) Started with the basic block design and then shifted it around into different settings. 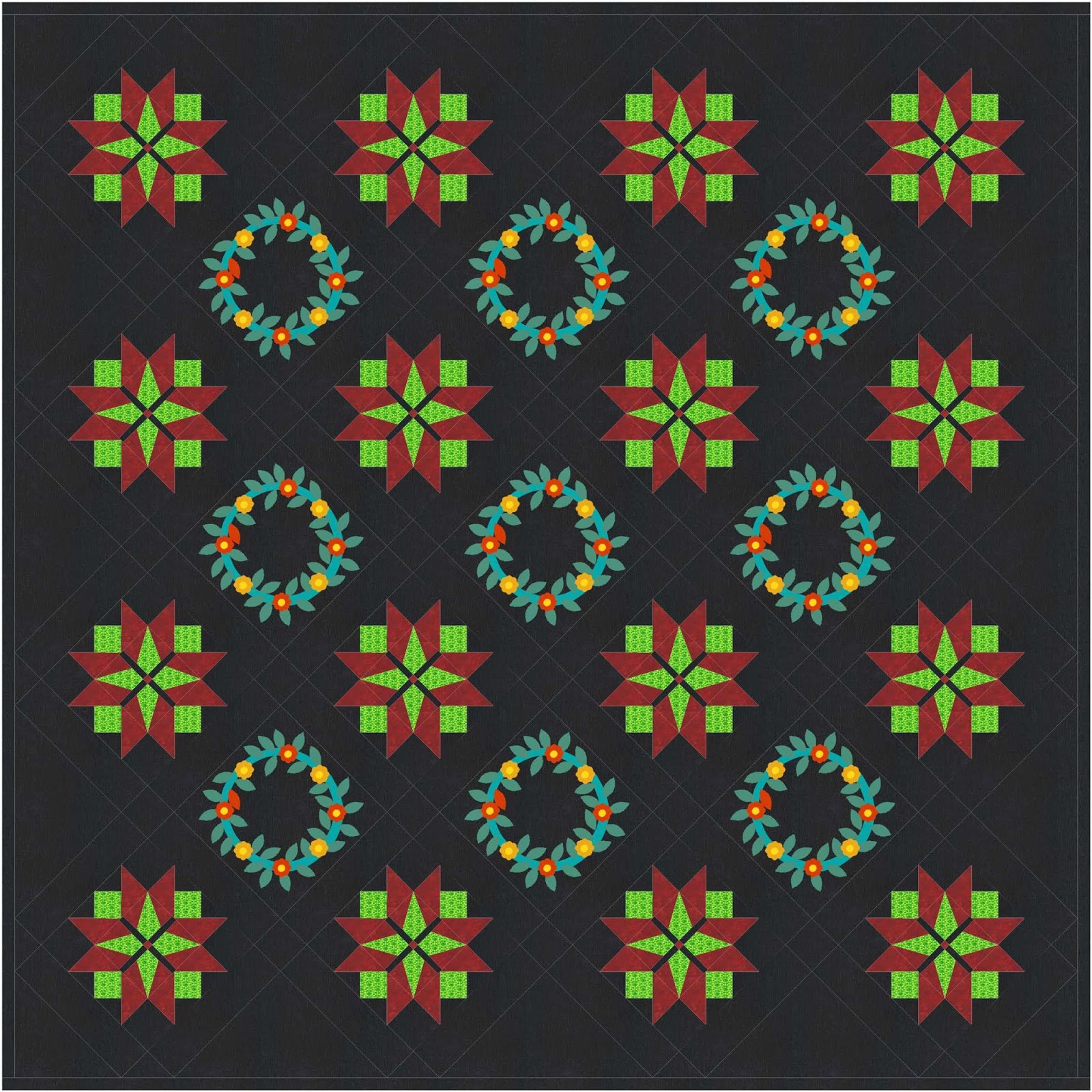 My original plan was to alternate the block with applique, but nothing I tried seemed to fit. 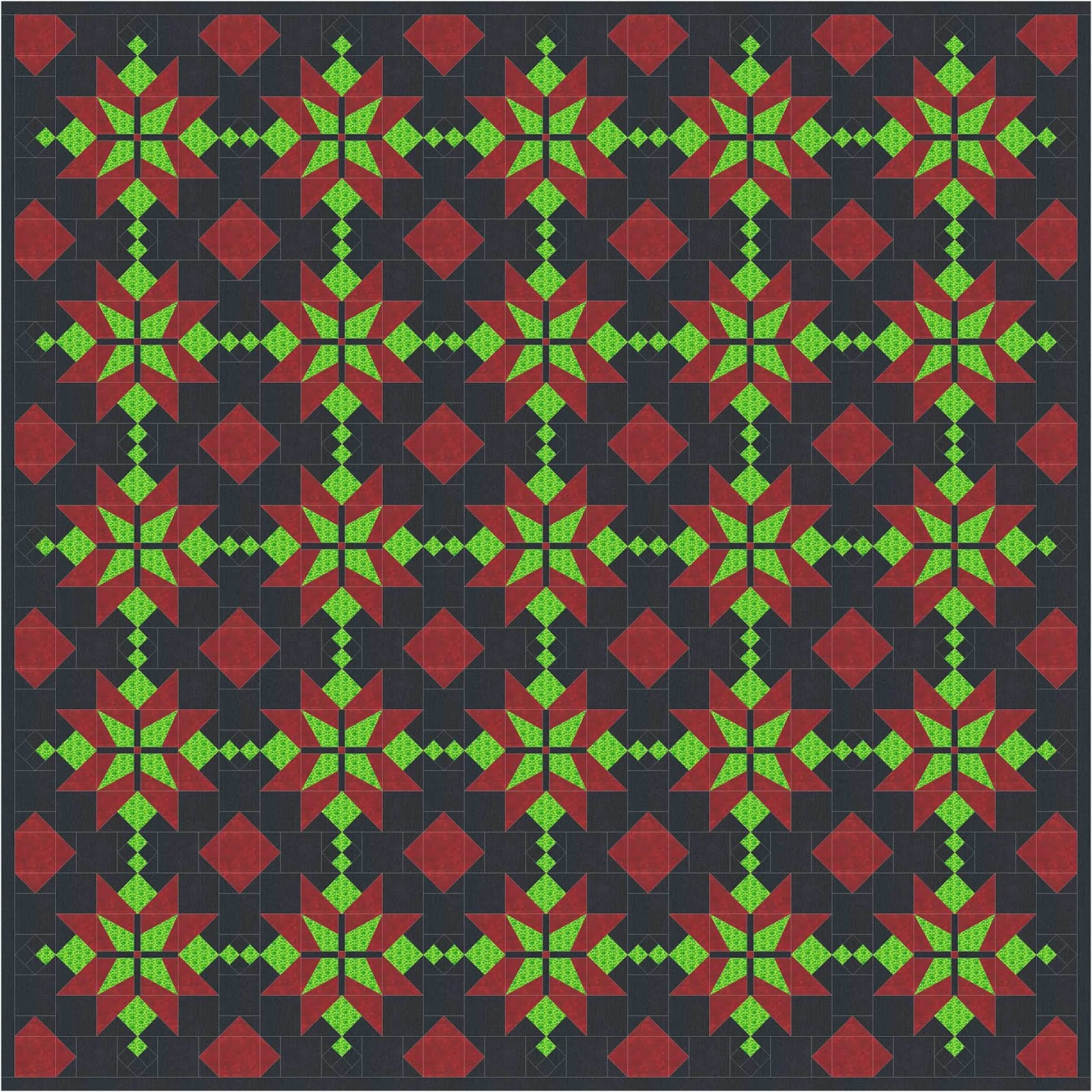 So I started messing about with alternating pieced blocks. After several tries, I found a design that I liked, but I didn't like how the seams fell. I try to avoid piecing the same color fabrics together, especially if I can find a way to sew it as a simple shape. 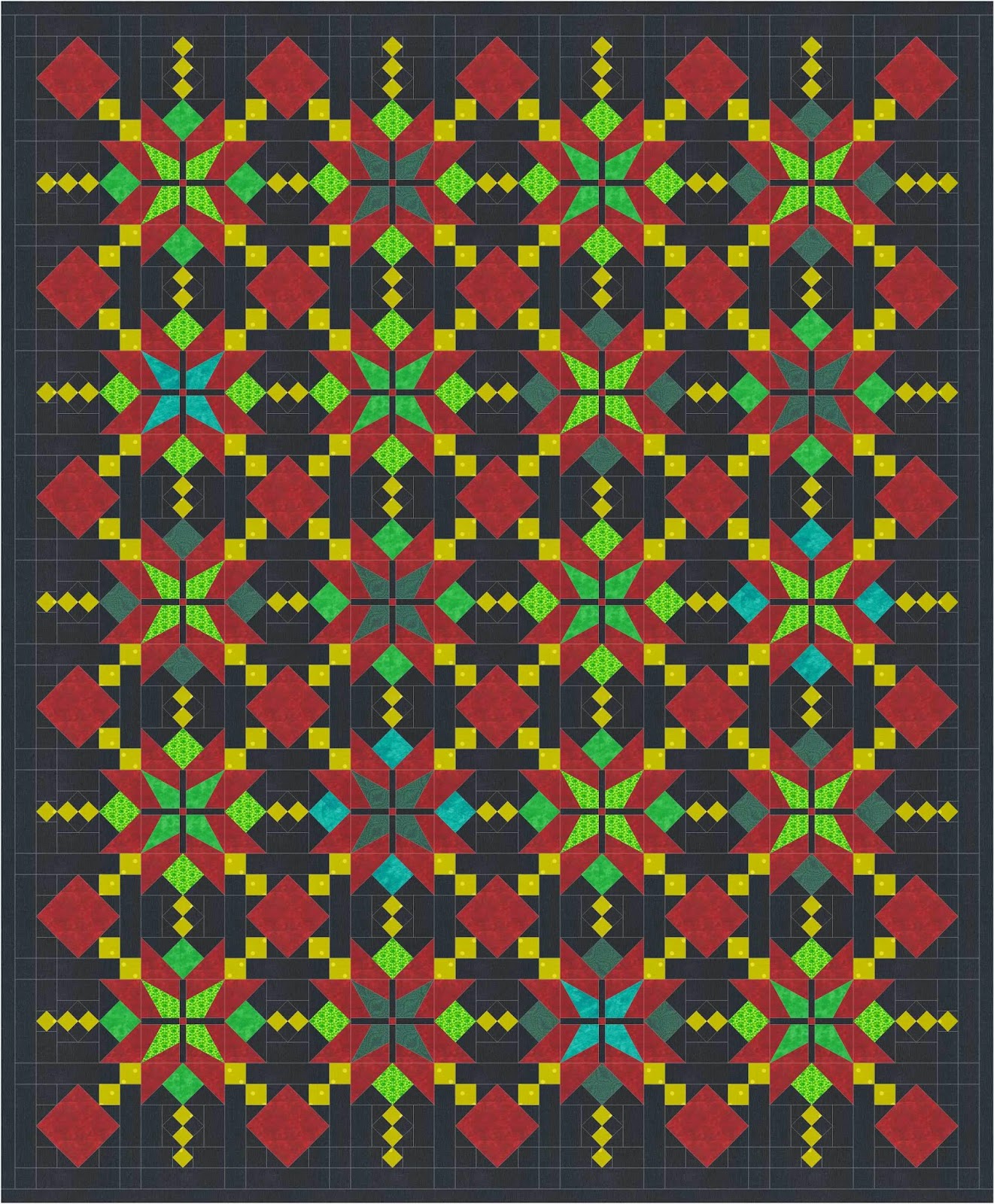 Then the "what ifs" took over. Can I let go of the idea as creating the block as a block? What if the block were to become the sashing and cornerstones, and the alternate block becomes the block? 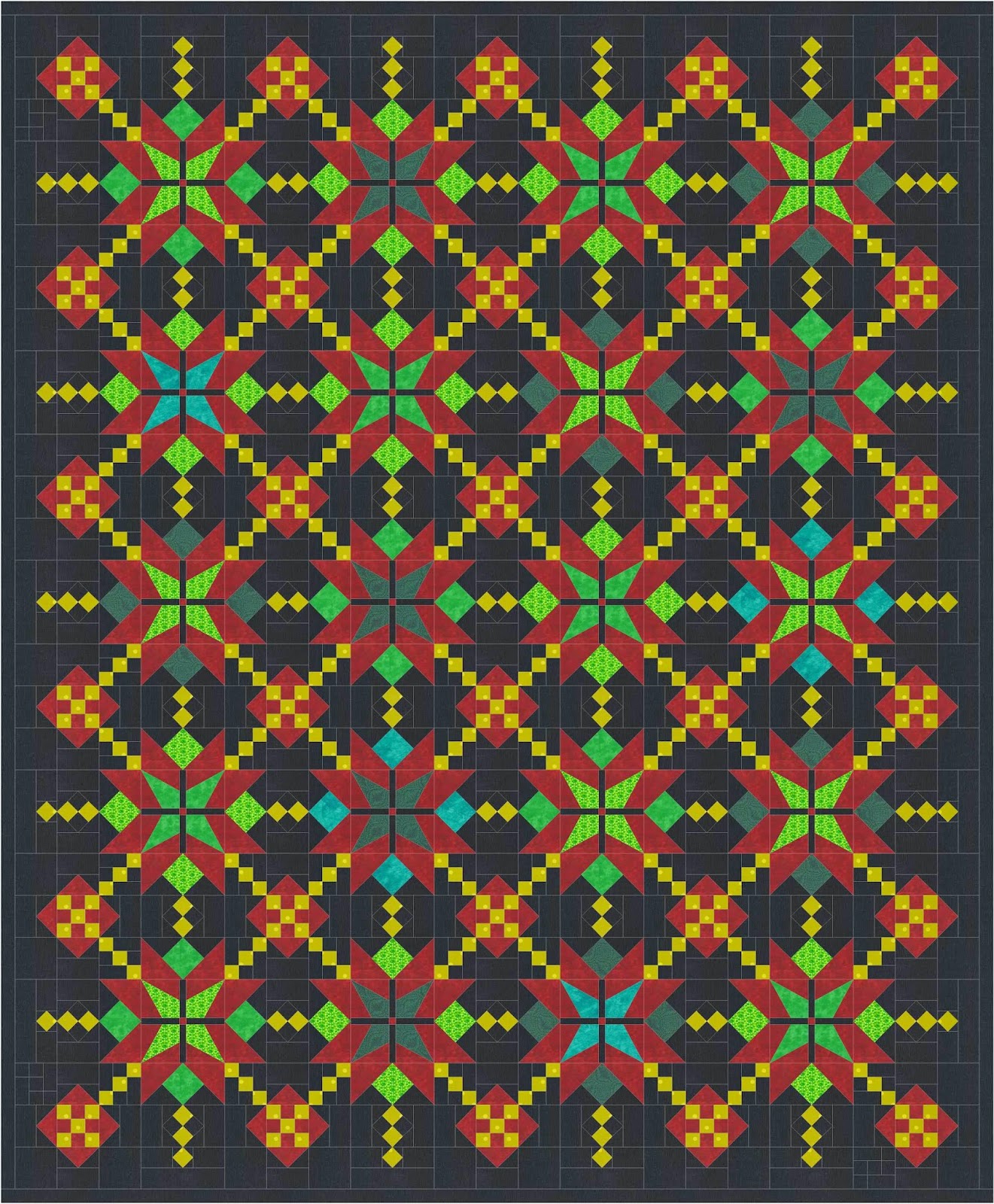 I really like how the whole stepping stone thing is working out, it kind of makes it sparkle, Let's add some nine patches in the center of that red square, yeah, the one that I redesigned the block to keep unpieced.

But, yikes, this design is just way, way too busy. And, even though I played with adding more color variation and a third color, I really wanted this quilt to be a little more understated. I have these three fabrics that I wanted to use, no need to make things complicated. (My fabrics are not quite so garish as how these are showing in the diagrams. I'm just using stock fabrics as placeholders.) Nothing understated about this one! 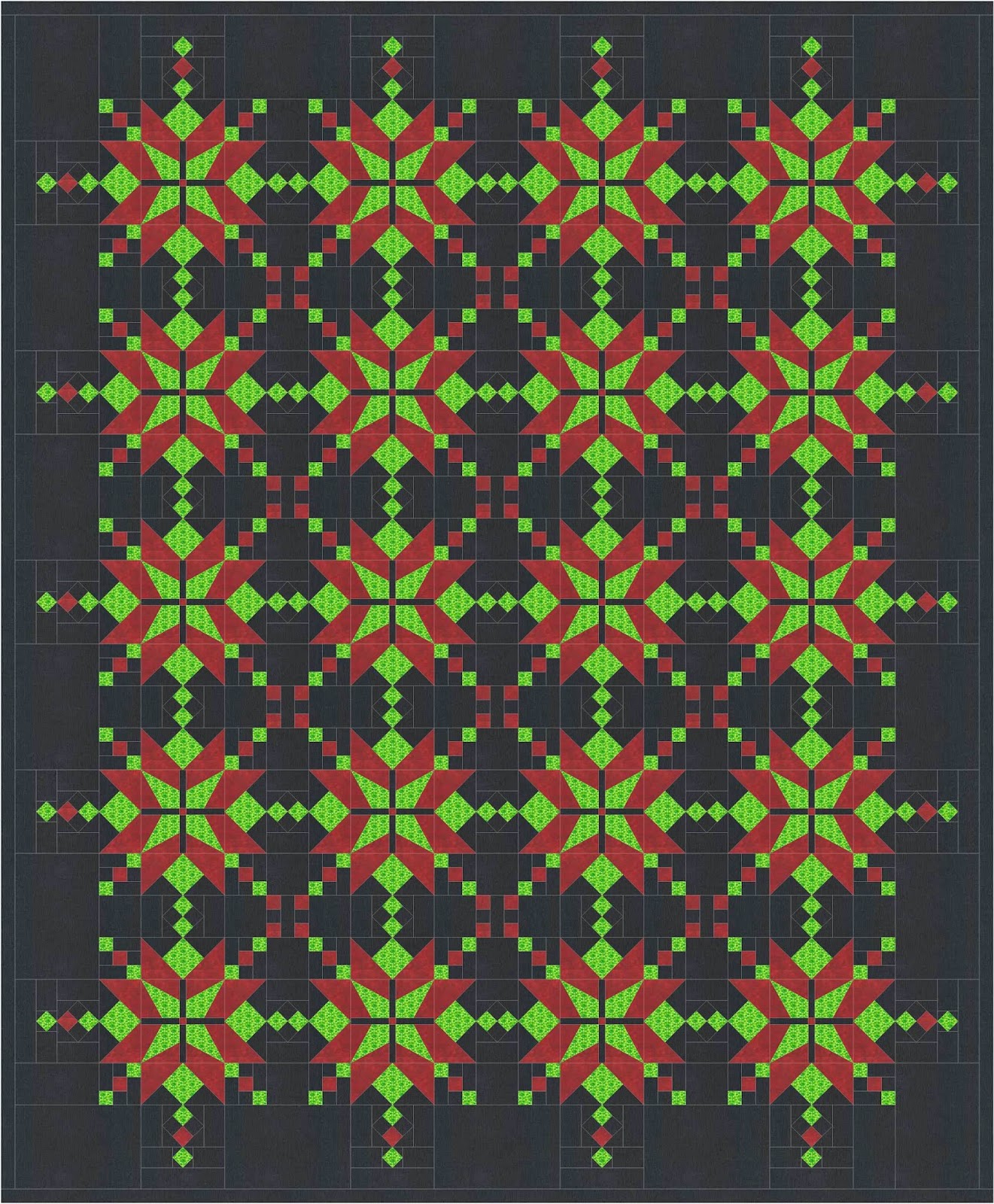 Now here we go. This I like. I like how the little squares sort of sparkle, alternating the red and green makes them wink in and out. The tiny break in the stepping stones echos the crisscross in the center of the blocks. Yep, after about three hours of playing (I couldn't believe how long I had been goofing around!), this is the design I settled upon.

Of course, old habits die hard, and along with all of the messing about with the design, I also consider what will become of it. Shall I publish it as a pattern? Would it make a good block of the month, although I'm thinking it would be more of a block of the week. 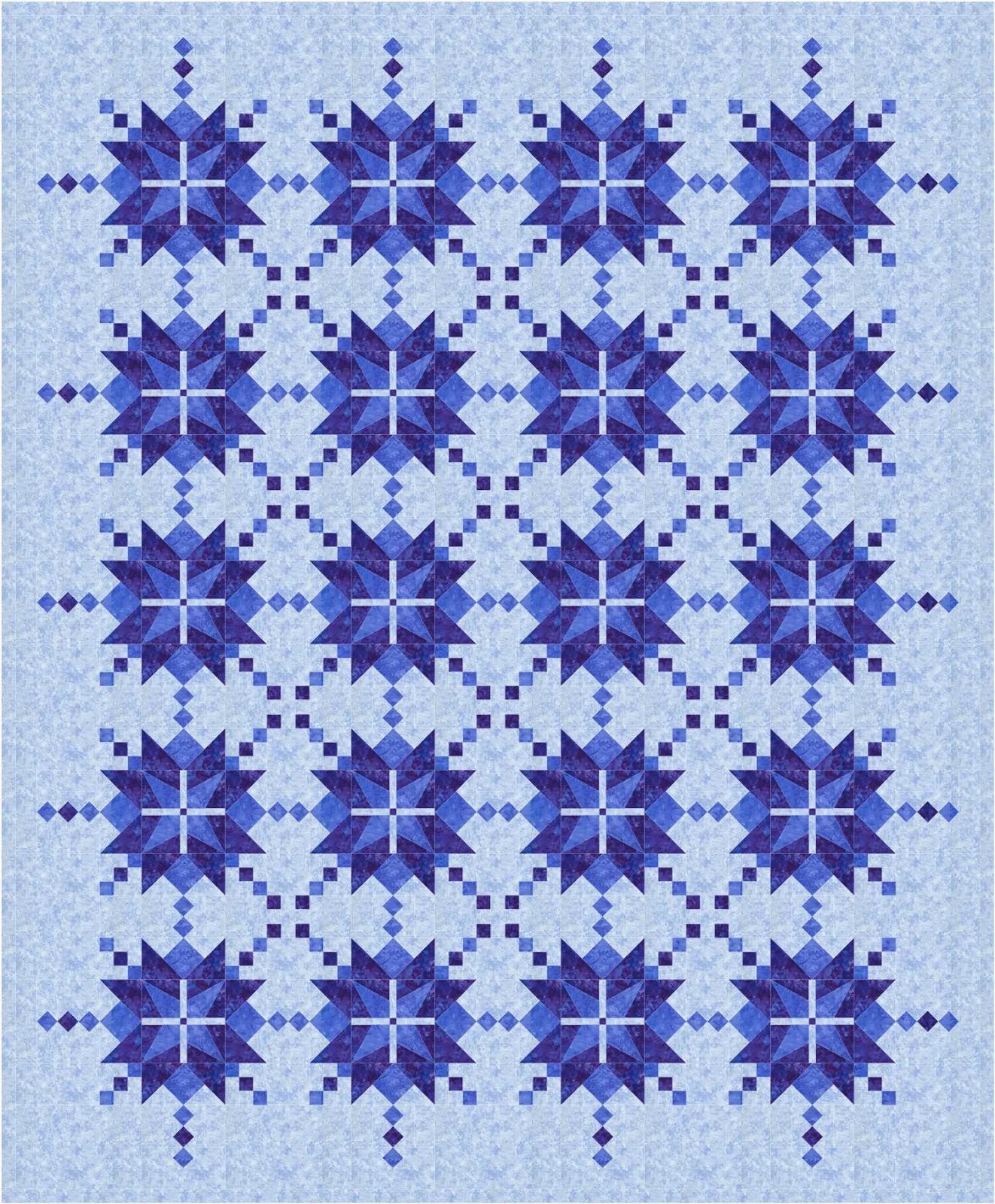 I'm calling the design Easy Peasy Christmas, because I'm using red and green fabrics that are dusted with gold. But how lovely it is in all blues! (Gosh, maybe I'll need to make more than one.) I would really want to change the name so quilters will feel more free to use their own colors. Suggestions? Interested? 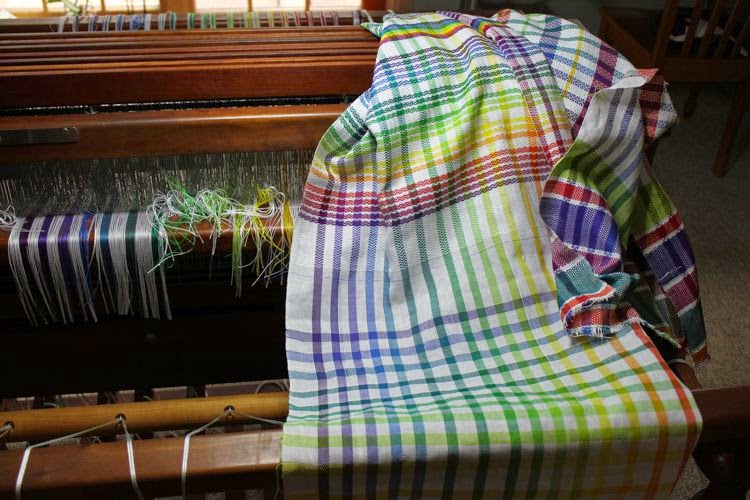 I've been exploring the weaving process on the floor looms. The jury is still out, if I will stick with it. Just like so many creative endeavors, there is a difficult step required to get through before the real fun starts. Putting the warp on the looms in physically challenging, and must be done well or nothing good happens after it. 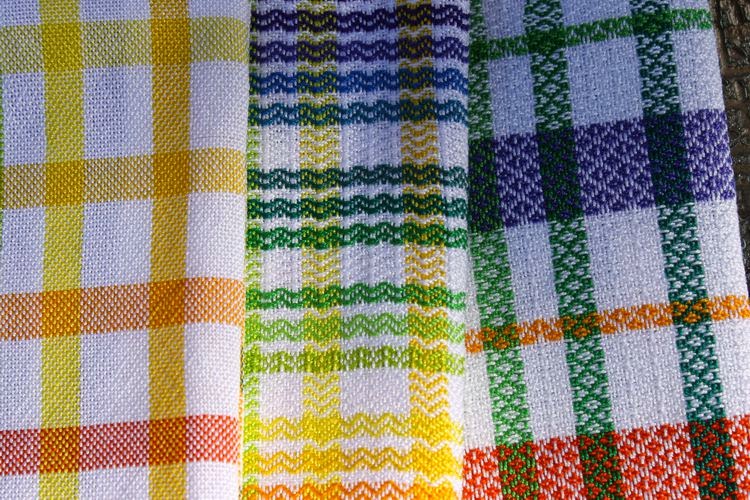 Weaving dish towels is considered the requisite first project for the floor loom, after, maybe a scarf or shawl. It should be rather mindless, sort of like chain piecing, but I find myself agonizing over symmetry. Arrgh! I'm not experienced enough to be able to visualize the entire towel, to make a pattern work over the length. The woven part disappears onto the cloth beam, leaving only about an eight inch section exposed. I forget what I've done, and what I planned to do. 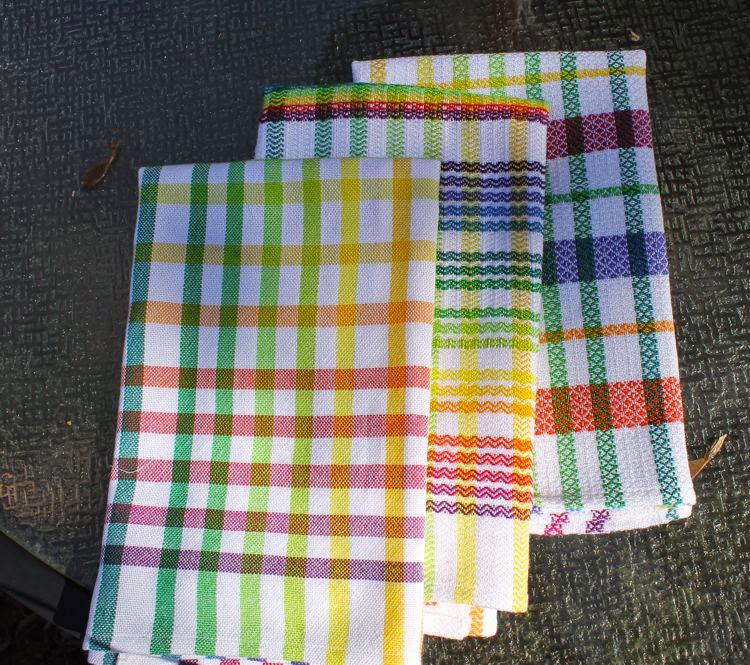 I have a new set of towels on the smaller loom, and I'm planning to be random with these. I'm planning to not plan. There are fewer colors in this new scheme, so I won't have as many decisions to make, which is about as good as it will get. I'll let you know how long I can be random before needing to make a plan. I don't think it will last very long.

Email ThisBlogThis!Share to TwitterShare to FacebookShare to Pinterest
Labels: Weaving 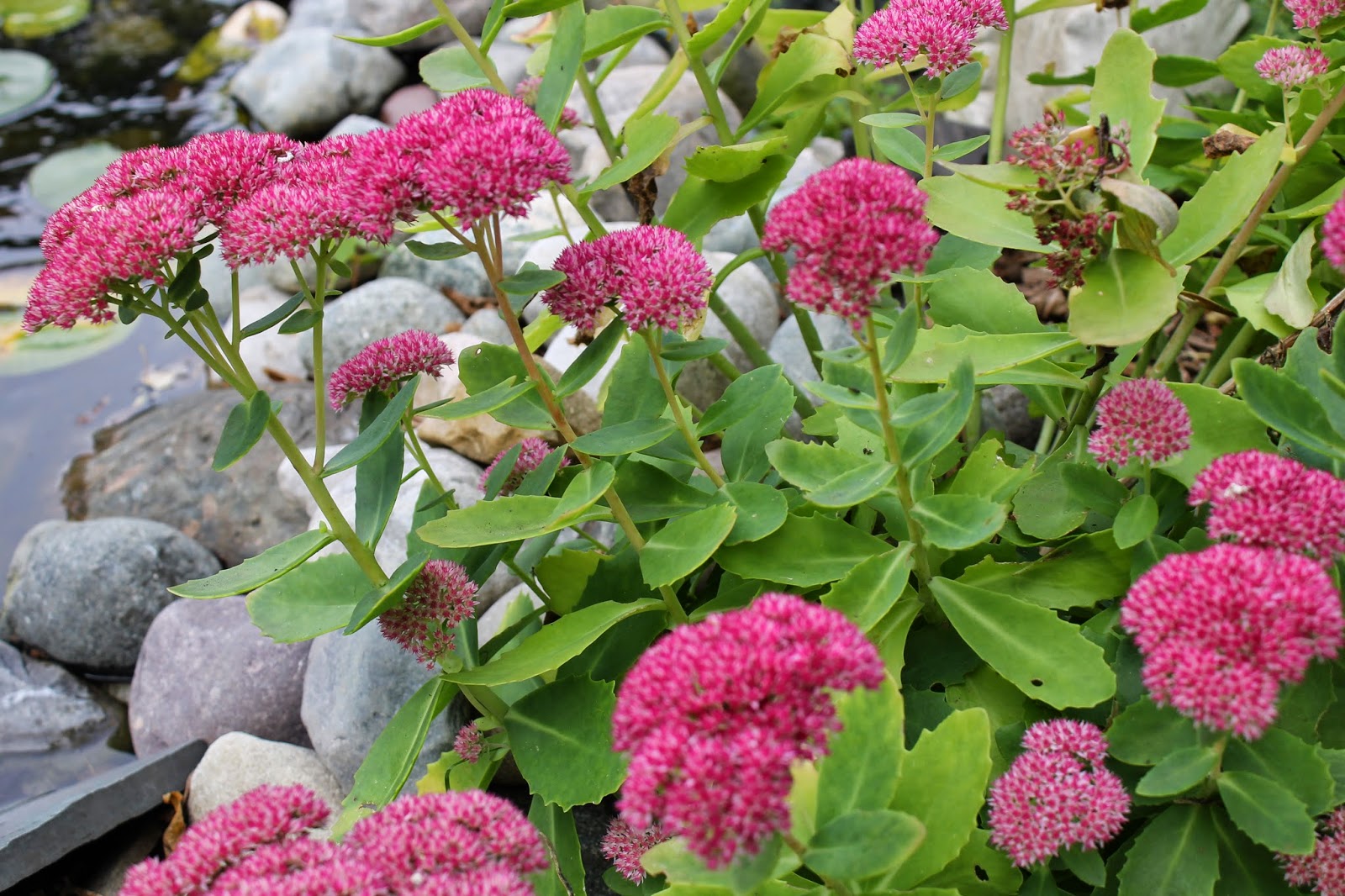 The last few weeks have been delightfully quiet, with pretty much nothing that's newsworthy. My days have been taken up with physical therapy on my neck, and then resting until the pain subsides. I've been taking it easy, on doctor's orders, just sort of gliding through days with no real agenda or plan, something that doesn't sit easily with me.

The decision has finally been well and truly made: travel is off my docket for the duration. Instead of visiting over a dozen guilds a year, I will book only one or two. Air travel will be severely curtailed, as I just can't manage the heavy suitcases without the risk of further damaging my neck and shoulders. It is just too physically demanding for me. No matter how I exercise to build upper body strength, the damage can't be undone.

We've been sneaking up on this. Risking further damage to my shoulders by reaching around to pat myself on the back, I'm good at teaching and speaking, and I love it. I've always felt that knowing something only became valuable when I could share it. It's been a very tough choice to make.

And then there's the blog. Many of my favorite bloggers have been soul searching about their blogs. Some have changed directions, some have redefined, even renamed, and others have chosen to stop blogging all together.

It's always been a challenge for me to blog, I just don't think that I'm all that interesting. In the beginning it was just another marketing tool for my quilting career. What will it be now, if my quilting career is in the rear view mirror?

As I've ventured out into other fiber art forms, I've worried that I'd alienate my "base", the quilters who follow my projects, and perhaps, buy my patterns. I love you guys, and I hope you'll stick with me.

I've had tunnel vision while building my quilting career. But now that I'm off that merry-go-round, my interests have grown just so much wider. In the last two years I've learned how to spin yarn, weave on a floor loom, and weave tapestry. I've remembered how much I love to cook and bake, to feather my nest, to knit and read, and sometimes do nothing at all. And above all, I love to learn.

So, from now on, for better or worse, the blog will be about me, my adventures and misadventures (because who doesn't love a good failure from time to time?) I hope you'll come along for the ride. There may even be a quilt or two along the way.