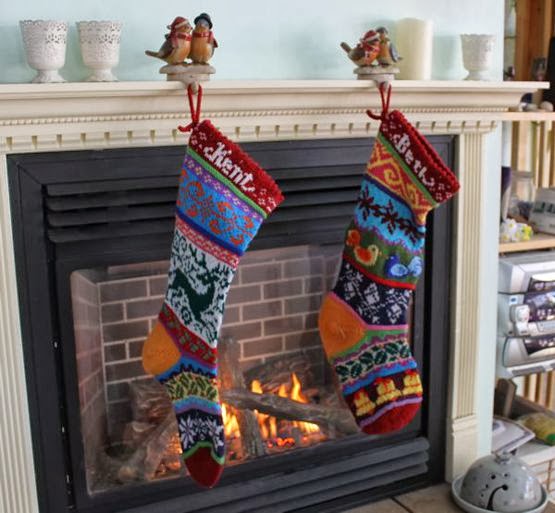 As I'm sure I've said before, it was a quiet Christmas for us this year. Christmas a year ago found the house brimming with our kids, their mates and grandbabies. This year, it was just Kent and I. It was our first Christmas on our own, maybe ever. As college newlyweds, we went home for the holidays during the break in classes. When the kids came, we celebrated with them. This time it was just us, and time for new traditions.

Colorwork, or stranded knitting, is a favorite of mine. It's sort of like doing cross stitch with yarn, following a chart to guide where the colors fall. It's a challenge to keep an even tension as one yarn is "floated" behind the yarn that is knitted. Long floats need to be wrapped into the working yarn to prevent gaps and catching on things, and, at the same time, keep the wraps invisible on the surface.

The designs on these stockings were adapted from patterns I found on Ravelry. (Did you know there are also forums for knitters who quilt, and quilters who knit?) The stag on Kent's stocking had to be modified to fit the number of stitches I cast on. 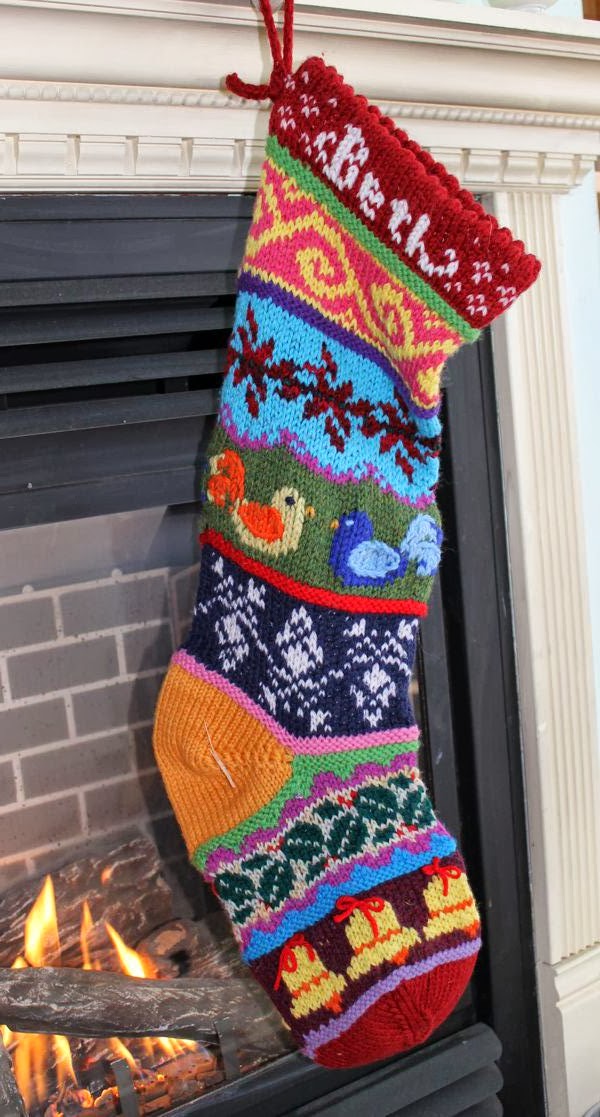 I've found a cool knitting design program that lets me graph out both color and stitch patterns. It's called EnvisioKnit, and it's as much of a black hole of time as Electric Quilt. I am looking forward to adapting some of my applique patterns into knitted designs for socks, fingerless mitts and mittens.


Turned out that the stocking idea was perfect. We slept in, we opened our gifts in our jammies, we played with our new toys. Then, instead of the massive brunch I usually cooked up for the hoard, we hopped into the car and visited the grandchildren. I rather like being the grandparents who show up later in the day with even more gifts.

I've always felt that children should wake up in their own beds on Christmas Day, instead of being hauled across the state to see the grandparents. Now that Alex and Nicole are really old enough to understand what's going on, it's time for Santa to find them at home.


We were surprised to find that we were only just a little melancholy. Kent likes to remind me that it was always our plan to raise self sufficient adults. The boys have become good men, creating new traditions of their own, it's the way it should be.  Even if it means that Kent and I celebrate alone, like honeymooners. It's a sacrifice we're happy to make.

In the deep midwinter

Living in Michigan, that fact that it's cold in January should come as no surprise. In this drafty old barn of a house, wind chill has a whole new meaning. Working in the studio, with windows on all four walls, has been nearly impossible. My little fireplace/furnace has been struggling to bring the temperature over fifty degrees!

Instead, I've been camping out in the living room. It's at the opposite end of the house, on the lee side, making it possible to actually take the chill off. I've filled my days with knitting and spinning, and binges of British TV dramas. I've just finished the last season of Doc Martin and I'd really like to smack Louisa on the back of the head.

It's been gray, heavy skies filled with snow. On the one hand, I've always liked that hunkered down feeling that comes with typical winter weather. On the other hand, I am desperate for color.

And then this fabric showed up in the mail. The print fabric is the focus of this year's Pilgrim & Roy Challenge, a fund raiser for the quilt museum in Paducah, KY. A dozen quilters are invited to work with this crazy fabric, to create a quilt that will be auctioned off during Quilt Week for AQS.

The envelope sat unopened on my cutting table for several days, until my BFF (Karen Boutte), who is also taking part in the challenge, asked me what I thought of this year's fabric. I got the impression that she wasn't keen on what we had to work with.

What spilled out of the envelope was this bright, colorful, joyful fabric! I immediately decided to go whimsical, and pawed through my stash of polka dots. What's happier than polka dots? I'm still kicking around the design, but you know it will include applique. What do you think?
Posted by Beth Ferrier at 12:22 PM 9 comments: