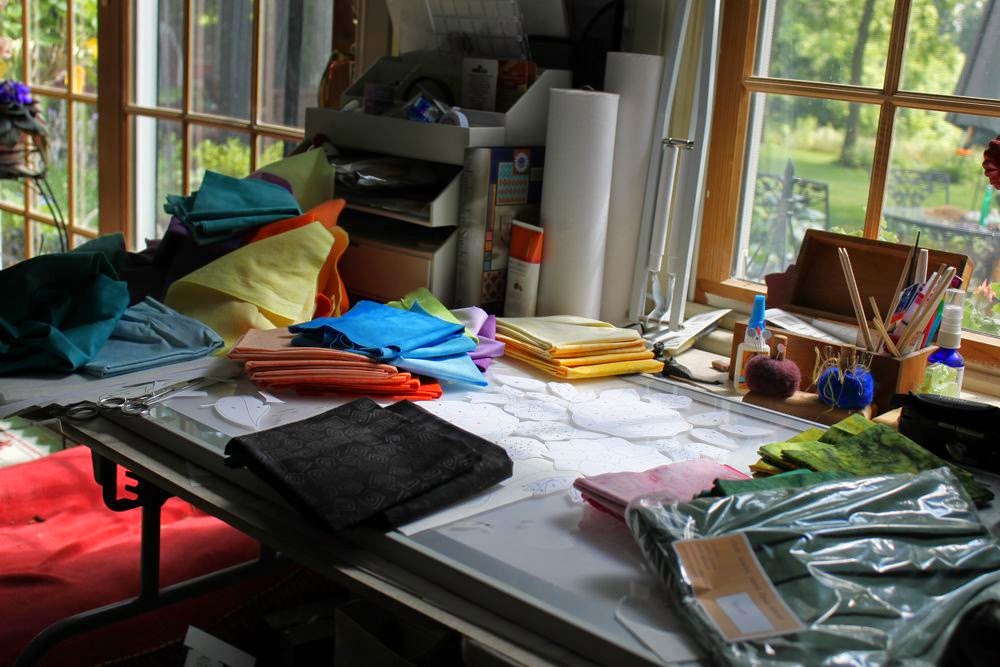 I've been invited to teach a three day applique class next March. Three days! I'm so used to trying to cram everything I know into just six hours that three days seems like an incredible luxury. I'm excited to be able to devote time to design, color theory and embellishment as well as technique. With this in mind, I've set out to develop the class sample.

My idea is to offer students a variety of flowers (you were expecting something else?), in several shapes and sizes, and allow them to arrange their own bouquets. The challenge is to present enough choices to keep everyone happy, but, at the same time, I don't want to offer so many choices that students can't make good progress on their samples. 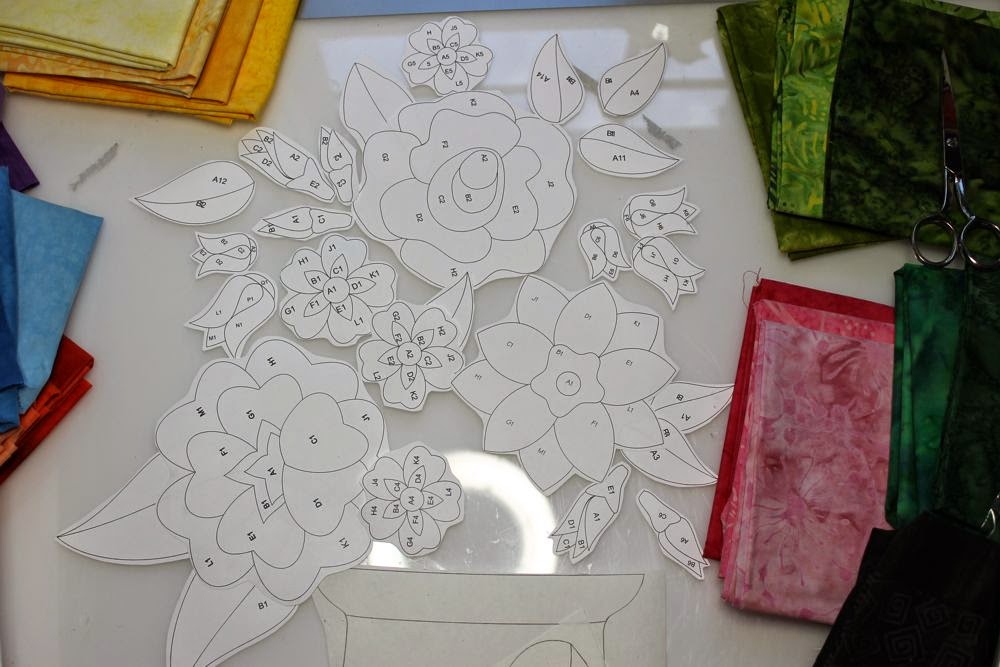 Here's my preliminary layout, with some of my fabric choices surrounding it. I've gathered up three different styles of main character flowers, there will be three of each in the handouts. I've used one of each here as a sort of tease, but also because it is this sort of mish mash bouquets I have been cutting from my garden. 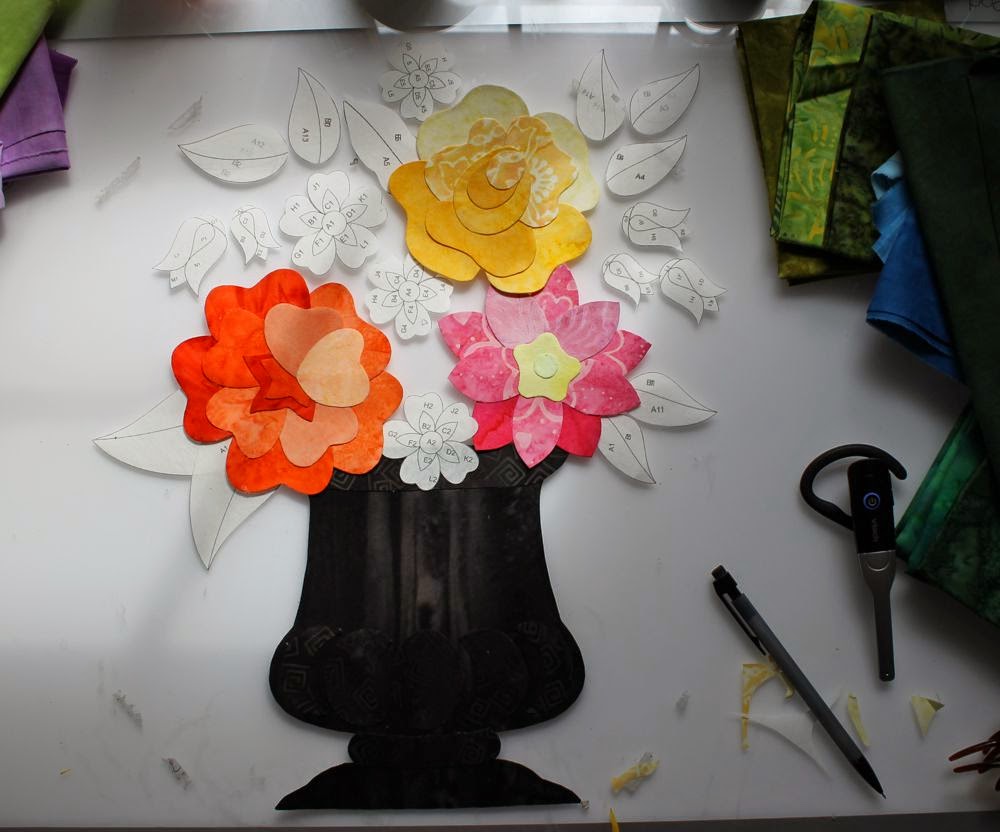 So far, so good, right? The vase isn't showing up well here, it is actually a little more complex that what can be seen. As I'm working on the glue basting I'm also considering what sort of embellishments I will add to the shapes. I may do a little ink work on the yellow rose, but I think the zinnia and the painted daisy will need some french knots, at the very least. 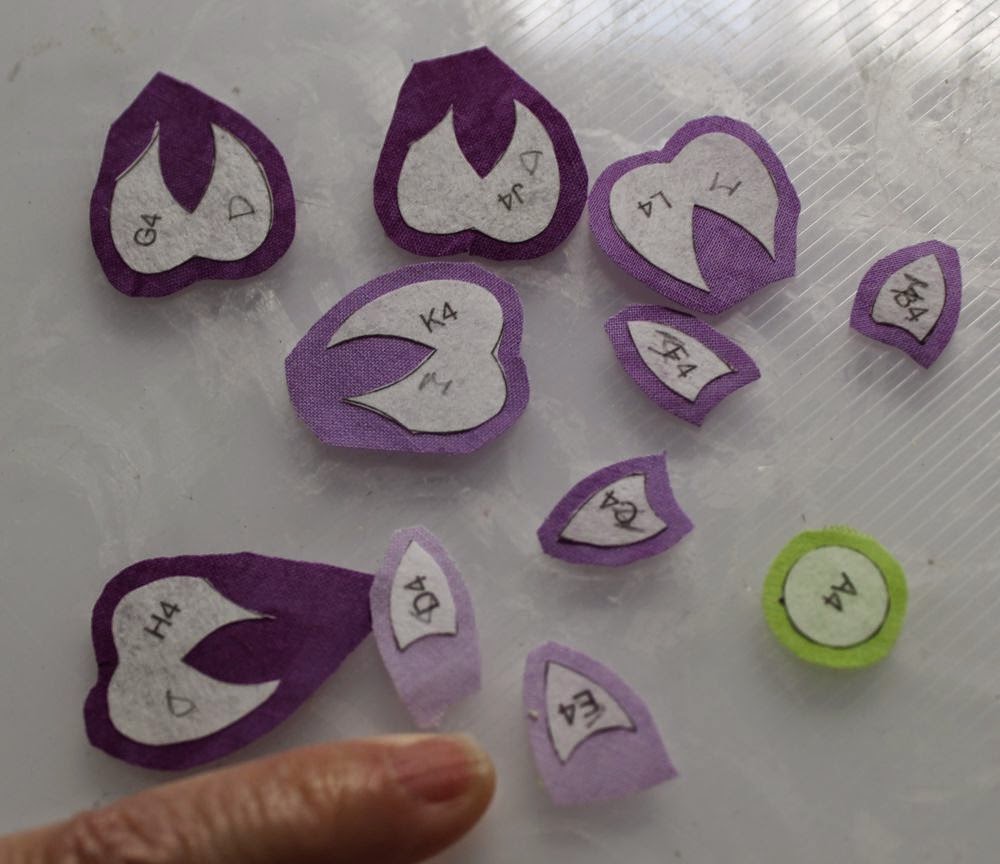 Moving on the accent flowers, it's there that I hit a snag. That's my little finger in the picture. That circle is less than a quarter of an inch in diameter. I want to challenge my students, not frustrate and discourage them. Glue basting shapes this small takes skill and patience. Most of my students would probably be able to pull it off by the end of the second day, but I'm thinking that I want to keep this class fun and gratifying. So, I'm back to the drawing board to simplify and enlarge some of the smaller elements. I think I'll leave some smallish ones in place, for those who really want a challenge.

I'd love your feedback! What would you like to learn in a three day applique class? Would shapes this small scare you off, or reel you in? Would you rather work from a proscribed pattern, or would the idea of designing your own bouquet excite you?
Posted by Beth Ferrier at 7:37 AM 4 comments:

A summer for gardening

It's been a lovely, quiet summer so far. The weather has been mild, a good mix of happy sunny days and charming all day rains. The flower gardens are really coming along, although I still have some major weeding to do on a couple of them.

Our hard winter was really tough on my perennials. Quite a few didn't survive, including several of my roses. I put off weeding and planning to see what really was gone, and what was just taking its sweet time about coming back. I've had a few nice surprises, especially from roses I was sure were gone. 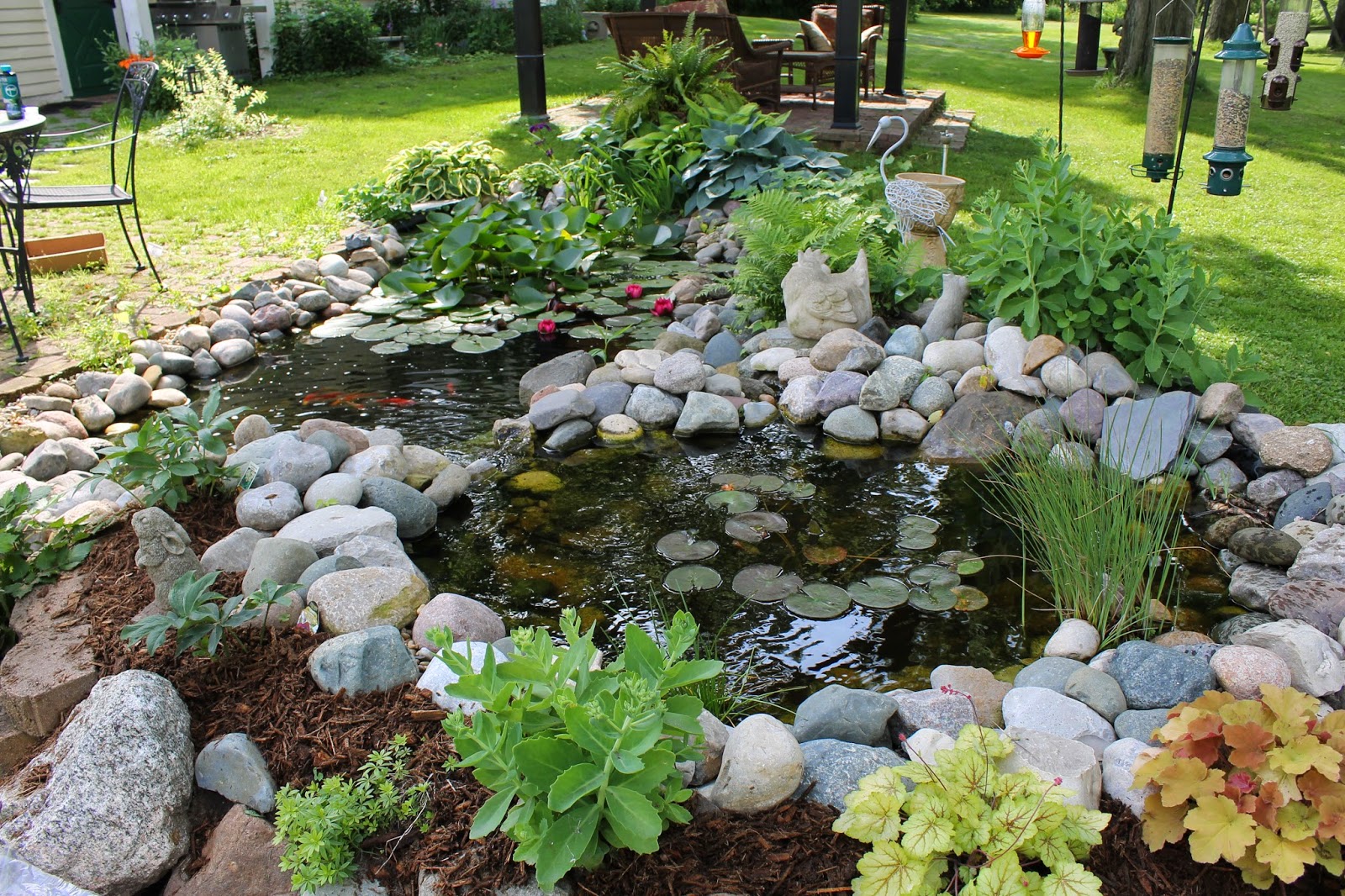 The pond also suffered from the hard winter. We lost nearly all of our fish. The ice was nearly three inches thick when we finally hefted it out of the pond, near the end of April. We'd been waiting for it to simply melt away, but our cool spring prevented that. Despite having lots of aeration, I think the fish suffocated. We've added three new fish and a few new water plants. and I think it is looking well again. 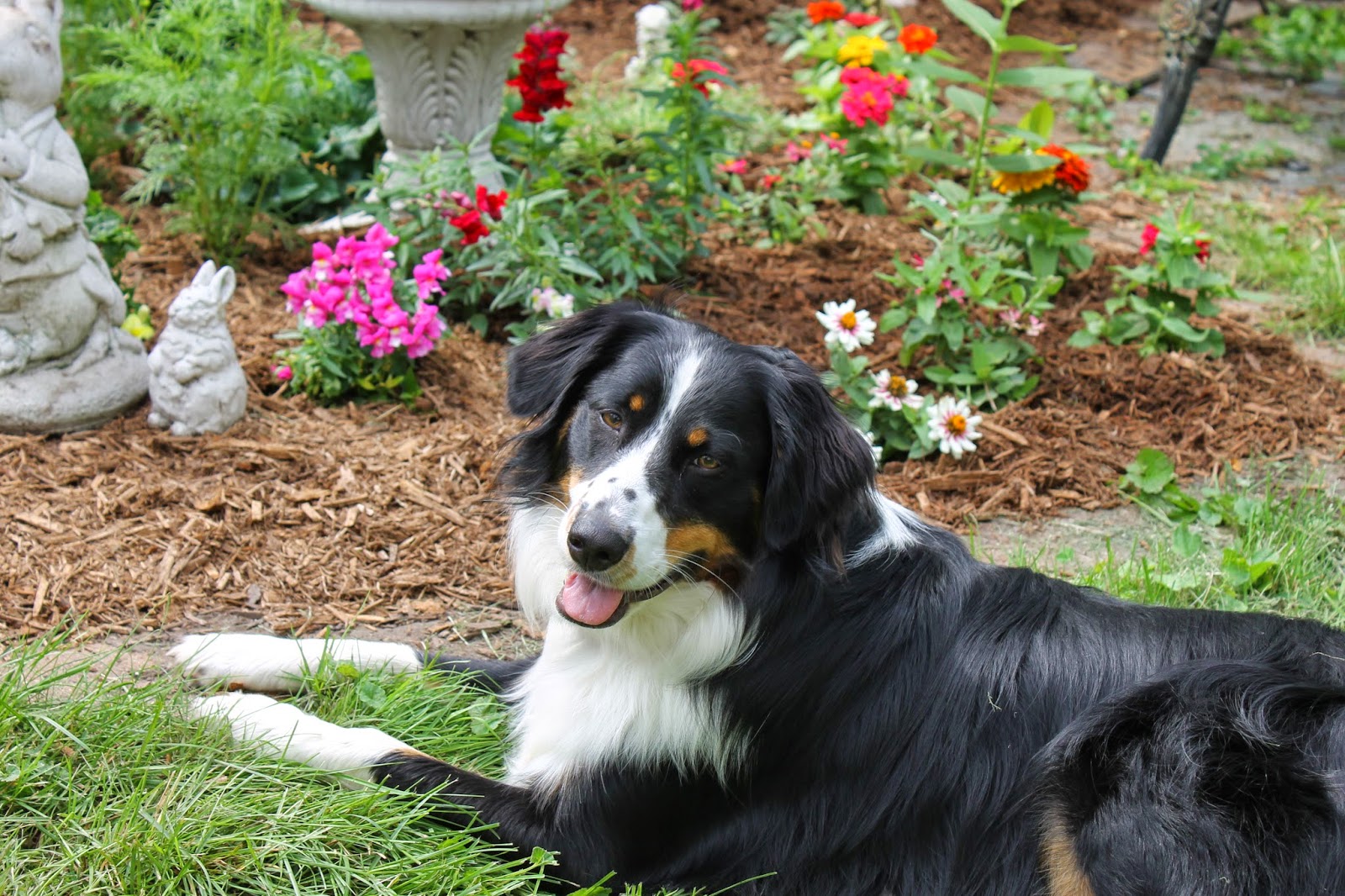 Gracie is learning that grass is good for sprawling, but mom gets super mad when she lolls around on the flowers. I'd lay prickly rose branches between the plants to discourage her, but they seem to be her especially favorite to chew. I catch her swiping them out of the weed cart all the time. 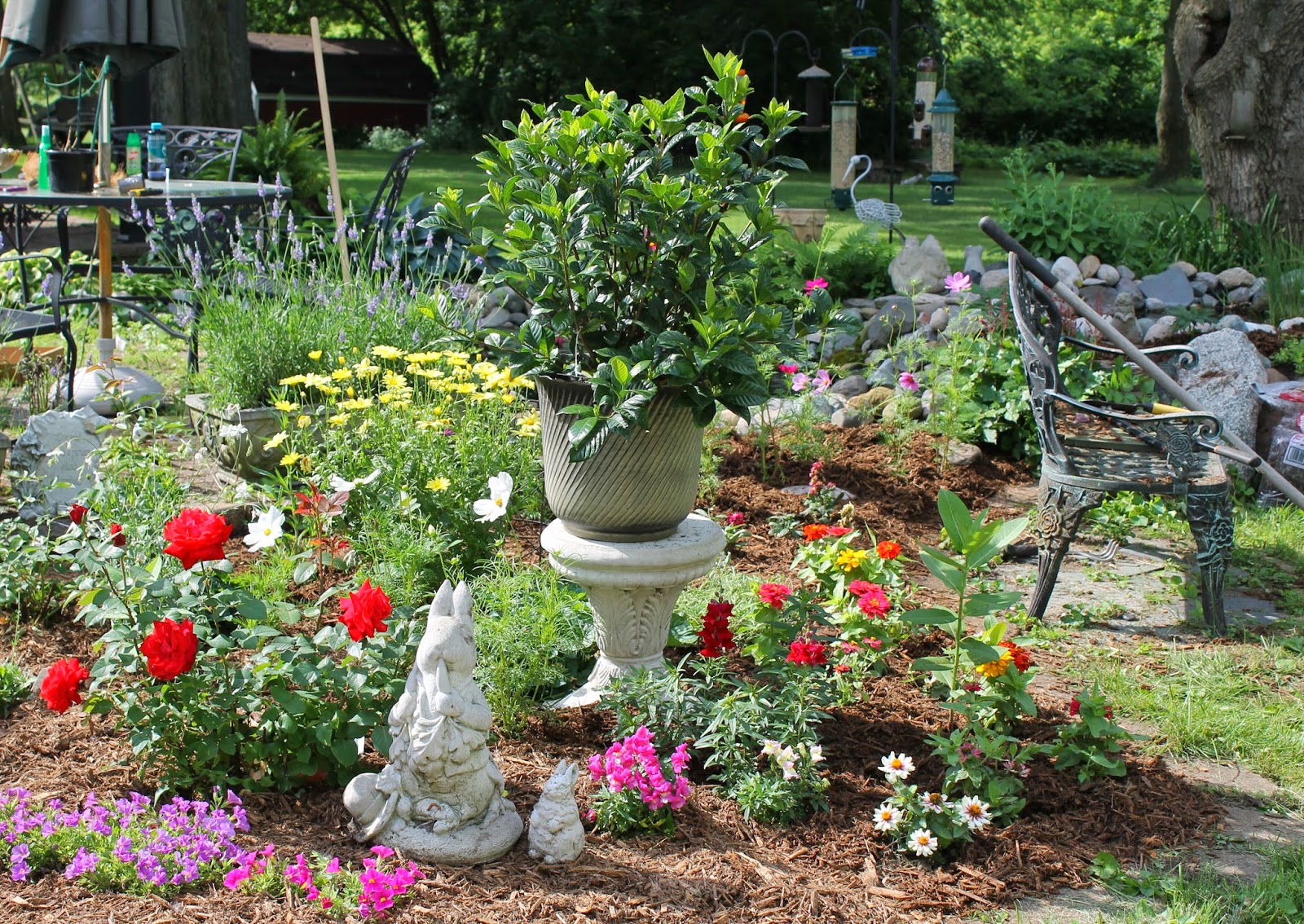 The gardenia is now constantly in bloom, adding its scent to the lavender and roses. I've left the few milkweed volunteers, hoping to coax a monarch butterfly, or two. I haven't seen a single one so far this year. 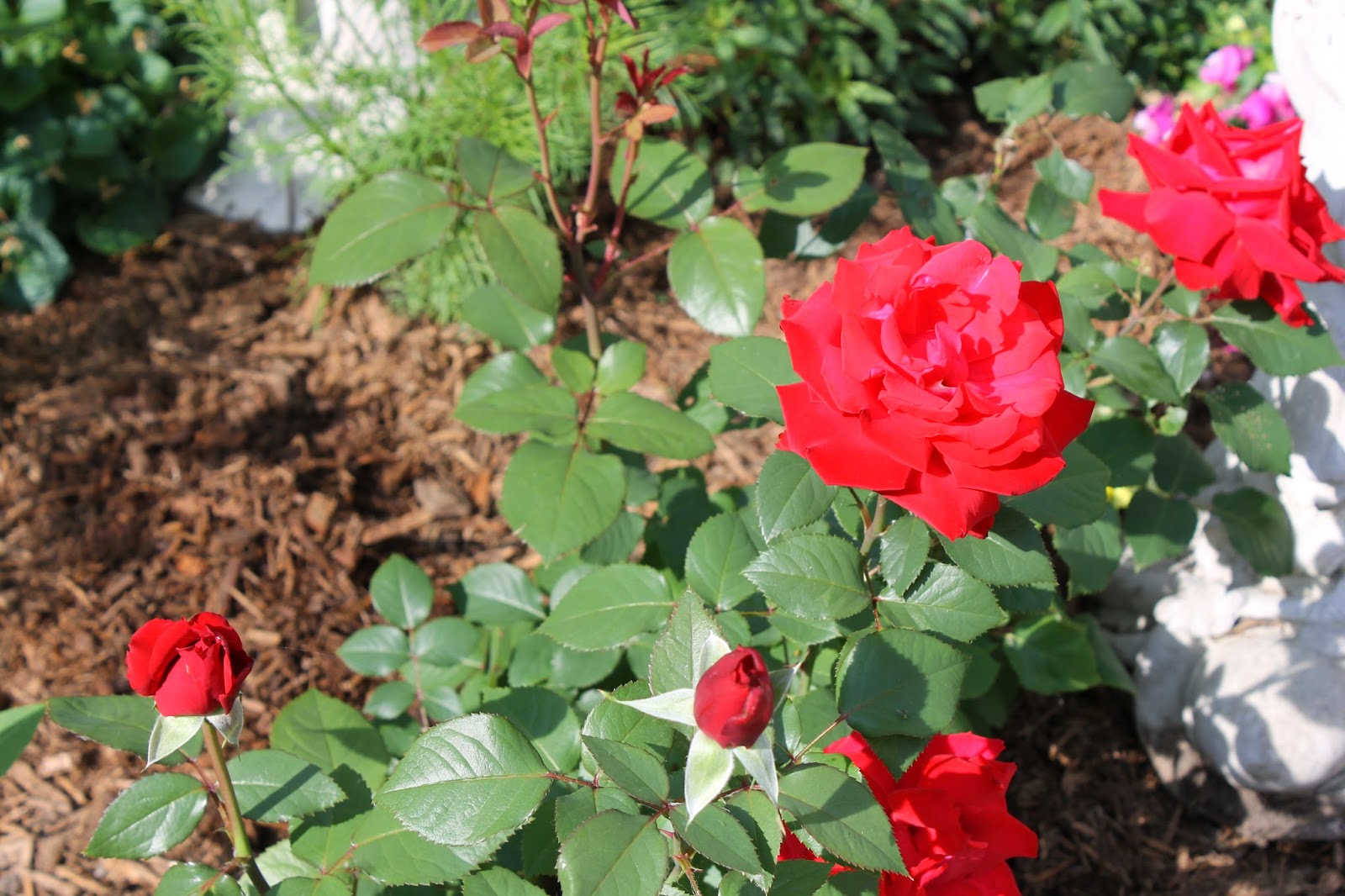 Email ThisBlogThis!Share to TwitterShare to FacebookShare to Pinterest
Labels: Gracie, In my Garden

And now for something completely different

As the previous posts have suggested, I'm learning to weave. I'm taking a tapestry weaving online class from Rebecca Mezoff. She is charming, delightful, and an excellent teacher. I've learned so much over the last couple of months, and not just about tapestry.

It turns out that I am the sort of student who would challenge me as a teacher. I wanted to know all of it, and now. In the first few passes of yarn through the loom, I knew that I was hooked. This is a new way of playing with color, and my mind just sort of boggled at the possibilities.

I chafed a bit when I learned that we wouldn't get to angles until part two, and curves would remain a secret until part three! I wanted to know it all, now. I will admit to some very ungracious grumbling. And then I recognized it. I'm that student. On the one hand, it's sort of a miracle to see from the teacher's perspective, seeing that moment when the door to all the new possibilities opens up in a student's mind, when a student totally gets it. On the other hand, it's super hard to contain the excitement and discipline myself to learn to crawl before trying to fly.

When it came to tapestry, I got it. I am the sort of person who is used to catching on to things quickly, at least anything involving needlework. It's in my dna, just as much as my green eyes and freakishly long legs. But tapestry is not needlework. There are no needles involved at all. There is an entirely new vocabulary to master, not the least of which is the interaction of warp and weft.

We're only part way through part three, and I'm excited to see what comes next. I can't say enough good things about Rebecca's class. It's part self-directed, but with a great deal of interaction with Rebecca. She responds to questions very thoroughly, sometimes even creating new videos to clarify a point for a struggling student. If you are at all interested in tapestry, check it out. You won't be sorry.

Posted by Beth Ferrier at 8:27 AM No comments: