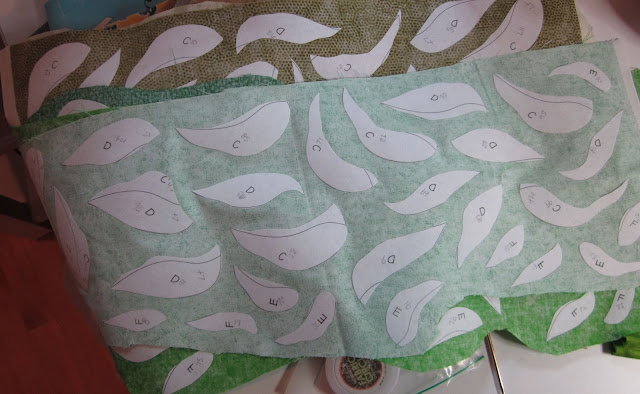 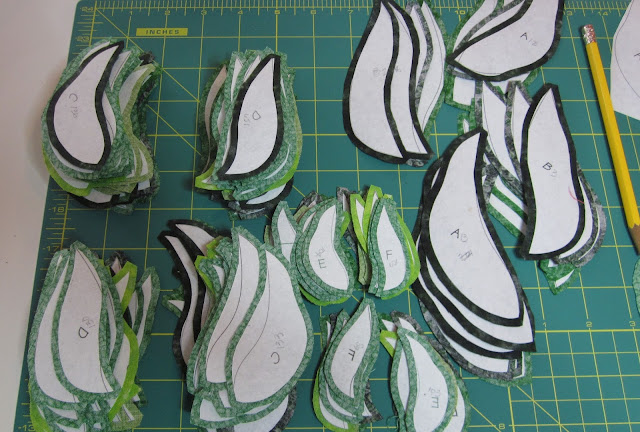 The trimmed halves have been sorted into stacks by letter. When I'm ready to get serious about the glue basting I will then sort the stacks into matching pairs. I'll blog more about that soon. I have a bit of trimming to do yet, time for more of Miss Phryne Fisher's adventure.
Posted by Beth Ferrier at 12:14 PM 1 comment: 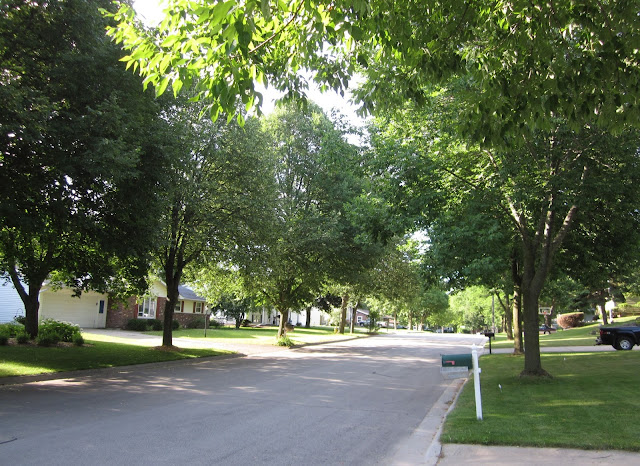 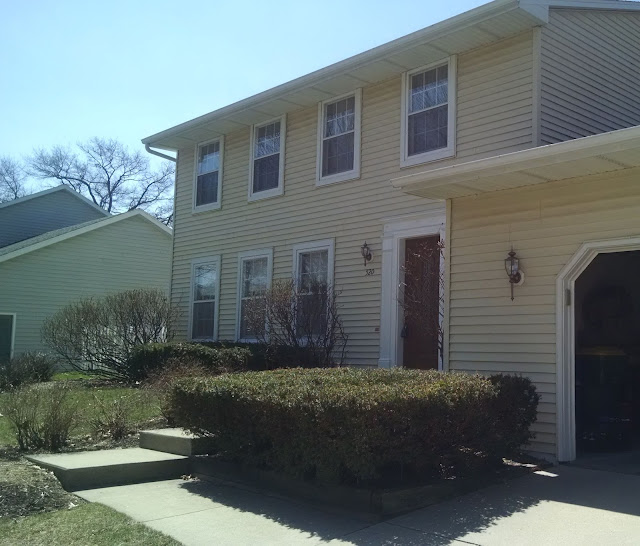 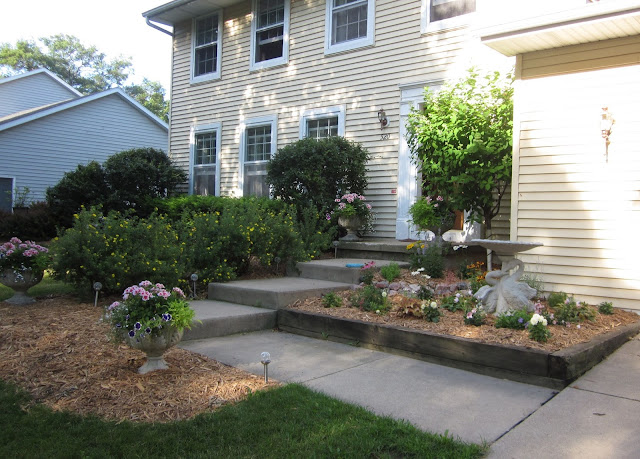 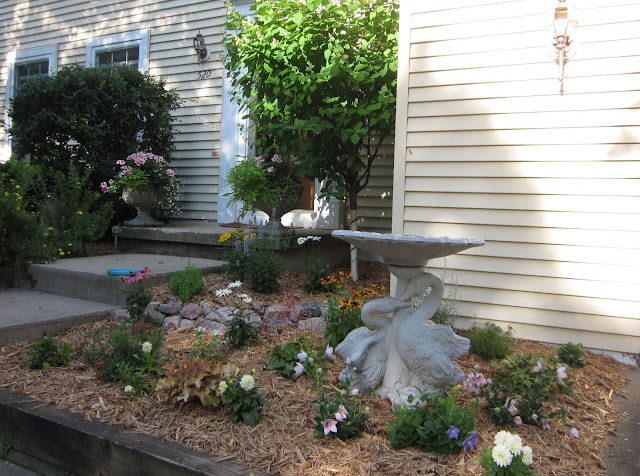 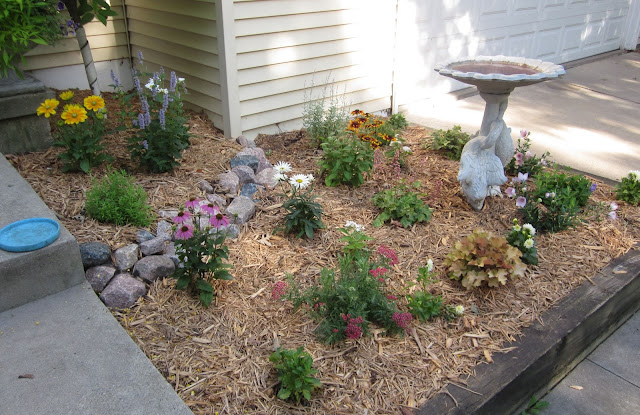 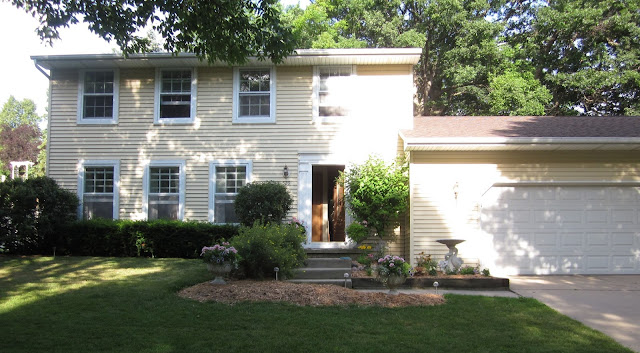 There now, doesn't that look so much more inviting? The big shrubs under the windows? Well, their days are numbered too.
Posted by Beth Ferrier at 10:21 AM 4 comments: 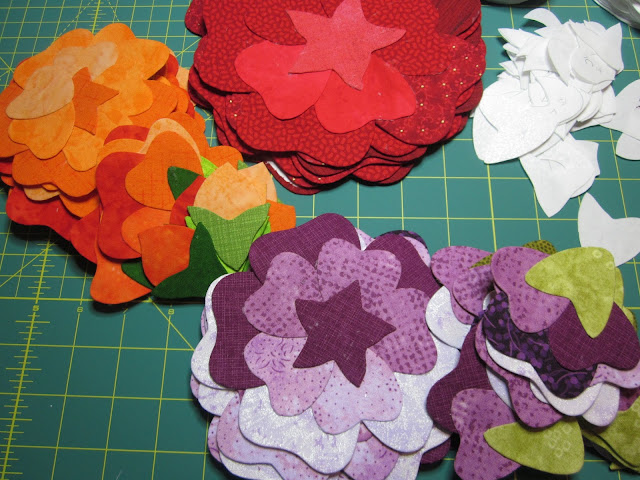 Step Six is up! Can you believe that we're three-quarters of the way through the project? If you've been keeping up then you're really ready to put this thing together. Of course, I'm way behind on the applique. I've been keeping up with the piecing because I feel I must test drive the instructions. As for the applique, well for me that requires a bit of a still mind and I've had anything but. 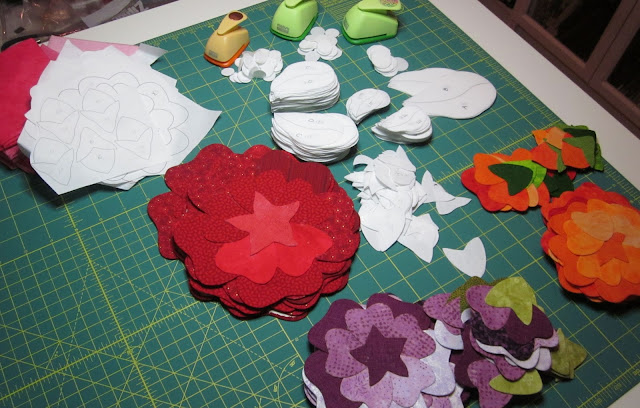 This is where my applique progress stands. My purple and orange flowers are all done. My big red roses are done (I did those early on to check on yardage requirements.) I've yet to start on my pink flowers, and the leaves, oh the leaves I have yet to do. 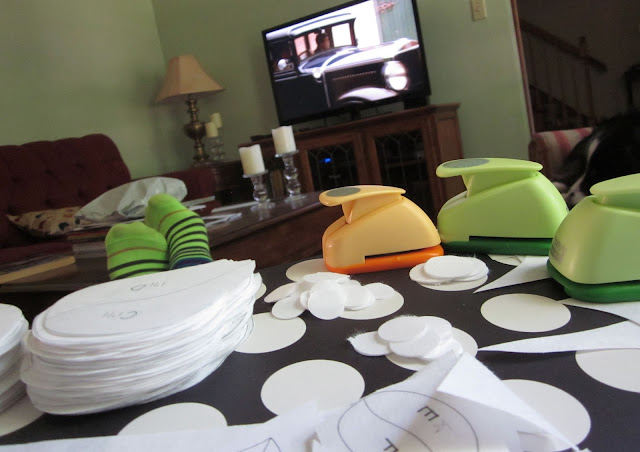 I spent a quiet afternoon yesterday watching Miss Fisher's Murder Mysteries on Netflix and cutting out all of the leaf templates I had printed. I also broke out my handy dandy circle punches to start on the required circle templates for the quilt. I'm so frugal, all of my circles will be cut from scraps left along the edges of the pages of Wash Away Applique Sheets.

I'm using Marvy circle punches. I find these little lever deals work best for me on the WAAS. I've tried Fiskars brand, and they may work wonderfully on freezer paper, but they're a dud on the sheets. 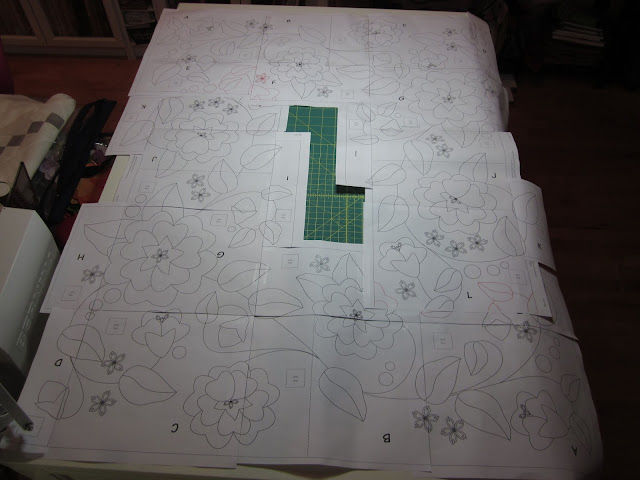 I probably should have lead with this, but here is how the center design template looks all taped together. I'm missing that great big cutting table I had in Saginaw, but when I'm ready to lay out the design I will make an appointment with the local shop to borrow their big tables. That's a while off for me though, I still have all of those parts yet to make, and they have to be sewn together, and embellished, and and and...

And the bias stems, yikes! Using a tape measure I figured out that we're going to need about seven yards of bias for the vines. That was the easy part. Trying to figure out how much fabric we'll need to make those bias strips, and also guesstimating how much we'll need for the borders too was a bit of a challenge.

Until I found this. I'm still dithering on all one fabric or many, but just in case I have a two yard cut set aside for now. And, I have a bit of applique to do before I must decide. How's it coming? Are you all set to lay out the applique center? 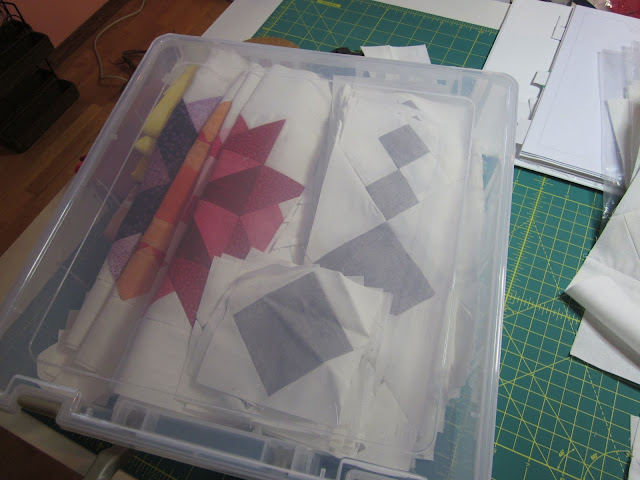 This is where my BOM has been languishing, tidily packed in an ArtBin, waiting for me to get my act, I mean studio, together. We're almost there, but we're still waiting for the replacement part for my cabinet. Kent finally assured me that the machine would be safe in the cabinet, but, you know, I wanted to wait for the part to arrive so that everything would be perfect. "Perfect" still gets to me. 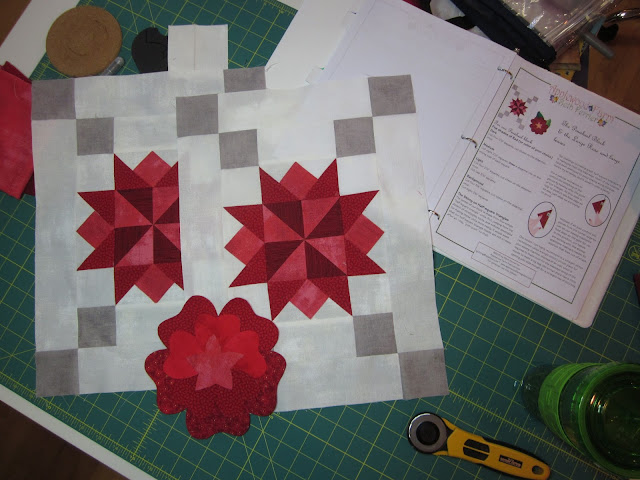 Here are my Step Five parts. Even though the step was posted weeks ago, my blocks were just sewn yesterday. I'm almost caught up. I still have the million and five leaves to do, but my little buds and flowers are mostly done. I'm putting the finishing touches on the directions for Step Six. I just need to add a few words, and figure out how much yardage we will need for the vines. I will have it up in the next couple of days for sure, and I will post on the blog about it.

As for the vines, I can't quite decide what fabric to use. I'm wondering if I should make the vines all from the same fabric, or mix them up using bits and parts from the leaf fabrics. I'm tending towards all the same fabric. What do you think?
Posted by Beth Ferrier at 9:45 AM 3 comments: