What I really did in November

It appears that I don't actually have a novel in me. Every time I give a lecture, at least one person tells me I should be writing. (Hmm, maybe that's instead of speaking? Never thought of that before.) Turns out it's not for me. At least not fiction. And not now.

But I do have these amazing grandchildren who need an amazing grammy. This, this is what I want to be remembered for.

Alex was most excited about the mess we were about to make than anything else, I did everything I could to indulge him. We had flour everywhere, and laughter and joy.

The holidays are different for us this year. None of the boys lives in town with us. First Nate and Amanda left to take a job on the west side of the state. Then Jake and Rachel took of to Baltimore so she could finish school. David joined Nate to find a job. And the Caleb and Elaine romped off to Kansas this summer to find their fortunes there.

Nate and Amanda usually come into town for Thanksgiving, but they usually arrive at our house later in the day, stuffed to the gills from her grandmother's table. This year, instead of trying to out Martha Martha (which I normally love),Kent and I and David had just a simple dinner early in the day. I made a turkey breast (why on earth hadn't I thought of this sooner?), and just the sides that we like the best. And pies. And dough for gingerbread houses. 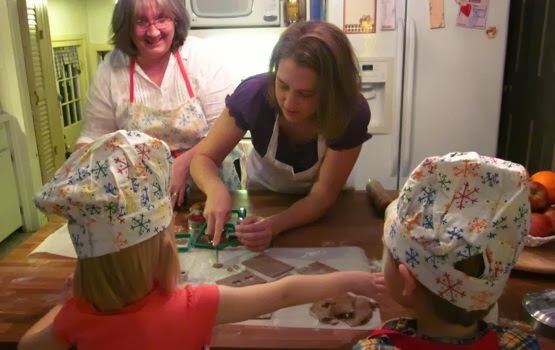 Just as the sugar overtook the turkey drouse, we fired up the oven and started building our cookie homes. I have a simple cutter set for the basic walls and roof, but this is a creative family and the deviations from the simple plan began immediately. 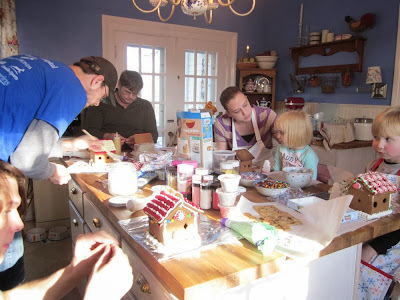 The next day, instead of fighting the crazy people at the stores, we got together again to build and decorate our houses. Even the men folk had a ball. Kent used a meat tenderizer on his gingerbread pieces for texture, so he built a "waffle house". Nicole pretty much just stuck pink sprinkles on everything, including some of us, but it made her happy. 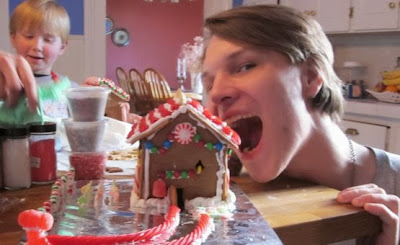 Even the "big kids" had serious fun. This is what you get when you ask David to pose with his house. Isn't it cool? He used yellow mini m&ms in the windows for the Advent candles we always place in ours.

It's kind of amazing what sticks with our kids. It may be trite, but it is true: life is what happens when you're busy making other plans. The boys seem to cherish the small things that made us a family, not the grand schemes meant to create a once-in-a-lifetime memory. 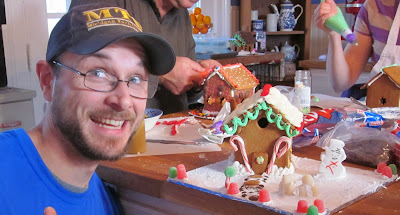 Nate, my son the engineer. I have always thought of him as my quiet son. He's always been intensely private. I'm not sure where this hysterically funny guy came from, but I'm so happy he's here. This guy works long hours; he and his wife are raising two delightful kids and creating a loving home. He makes my heart full. 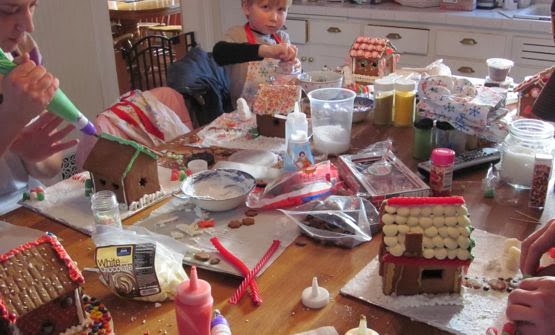 Alex got his mess alright, and then some. Even though we had some housing disasters when the mortar failed, we all had just a spectacular time. The houses are currently living on my dining room table, but I have plans for them.

When it comes to holiday, sometimes different isn't so bad. I got to keep the best part of Thanksgiving, and have started a new tradition on holiday house building. If it turns out that Kent and I are on our own on Christmas morning (for the first time in more than 30 years), I don't think it will be bad at all. I hear I may have some new "grown up" jammies under the tree.
Posted by Beth Ferrier at 10:27 AM