One of the crazy things about our backyard is there is no easy way to get to the top. It's a fairly steep hill, with a four foot high retaining wall. It's wonderfully private. There's a nice flat spot near the top that will make a lovely spot for reading or coffee, but only if you have billy goat in your ancestry. 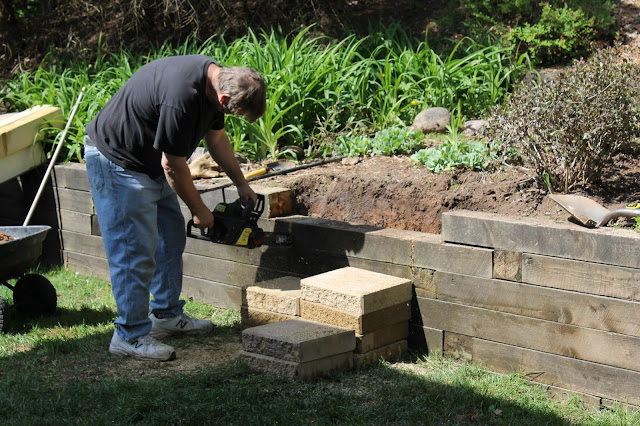 Last summer we still owned the house in Saginaw, so our budget for improvements was pretty limited. This summer we had a little more to play with, so the first thing we did was cut a staircase into the wall. Of course, I'm using the royal "we" here. I think up these crazy things and Kent is a willing participant. 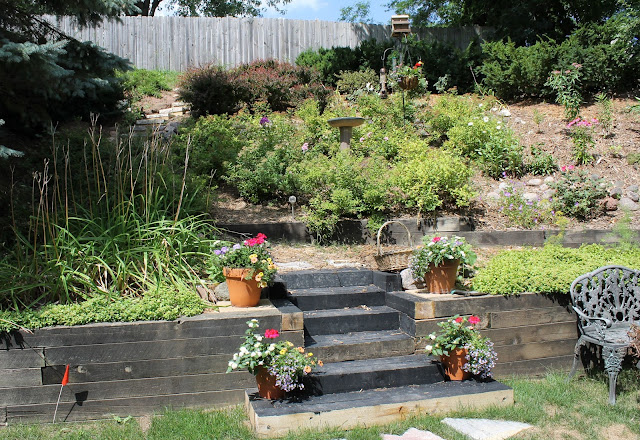 Aren't they wonderful? It was decided that the new railroad ties needed to be stained to match the existing ones and Kent set out to accomplish that one morning while I was out. He said he knew pretty much at the first brush that the color was wrong. But the color had looked right in the store, so maybe he needed to do more just to be sure. After a while, even though he was convinced that the color was wrong, he had already done so much that he decided he might as well finish. Luckily he ran out of stain.

I had to laugh. We've all done it, haven't we? We push on, even though our gut is telling us we're on the wrong path. The rationale can be so silly: we bought a whole gallon of the paint, the store for replacement is closed, it will quilt out. Pretty soon we're so far in that going back seems impossible. So instead of trusting ourselves enough to quit at a false start, we plow on until there's no way to redeem the project. Not only is the project spoiled, but we had a miserable time doing it!

We don't know what to do next, it's a good quality stain, even sand blasting hardly made a dent. I'm hoping that a little weathering will do the trick. Because I'm an incorrigible optimist I'm hoping that an answer will present itself next spring when the snow thaws. Keen eyes will notice the stone stairs going in at the top of the hill. There are a few more steps to go, but by next summer we'll be able to easily get around in this crazy, vertical garden.

Email ThisBlogThis!Share to TwitterShare to FacebookShare to Pinterest
Labels: In my Garden, Just Thinking