A day in Pompeii 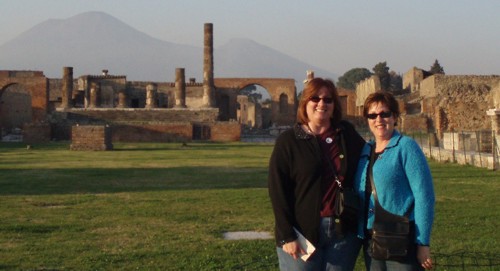 Long ago, when my hair was still red, Heather Purcell  (Mother Superior) and I went to Pompeii. It was part of an invitational trip to Switzerland, to see the Bernina factory.

It was Heather's idea, actually, to visit another place in Europe, since we were going there anyway, and neither of us had ever been. That's a little like saying, I need to go to Vermont, let's visit Florida along the way. But I was game, so after some conversation, we decided to fly to Rome a week before the Bernina event, so we would be over our jet lag and have our clocks reset. We were going at the end of November and we didn't want to end up in weather too wintery . It turned out to be one of the warmest winters Europe had enjoyed in many decades.

At first we had ourselves a fun competition, seeing which of us could take more arty pictures of textures. I have close to a zillion, and they are all as facinating as these two. 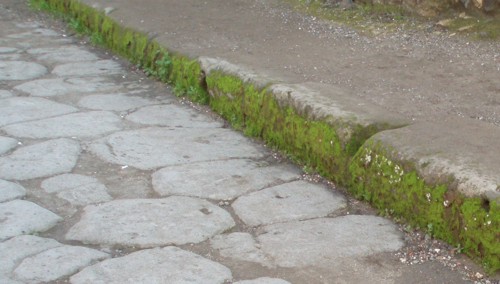 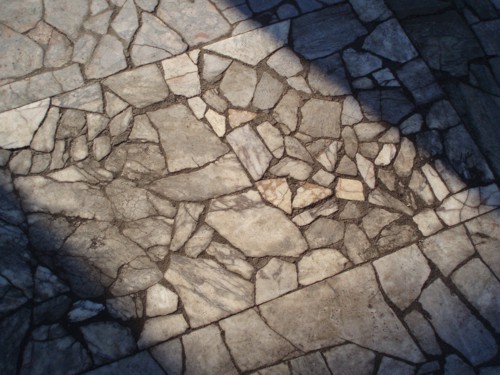 We had a terrific tour guide, an older Italian gentleman. (It turns out that there is a huge difference in Native Italian speaking English, and Native English Speaking.) As we were introduced to Pompeii's daily life it became clear that if it hadn't be wiped out by a volcano, Somebody owed an apology to Sodom and Gomorrah. My, my, these folks were lusty!

The businesses seemed to come down to two basic sorts: brothels and doctors to cure what the men picked up in the brothels. They didn't seem to care much for treating the women, therefore assuring the doctors a steady stream of patients.

The guide explained that there were three levels of doctors. The first treated the fellows', um, ah, privates, with topical creams and powders.

When that didn't work, they went to Doctor Level Two for more invasive therapy. I shudder to think of what that must have meant all those years ago. But men are awfully proud of their, um, ah, privates, so they are willing to do pretty much anything to keep it operational. 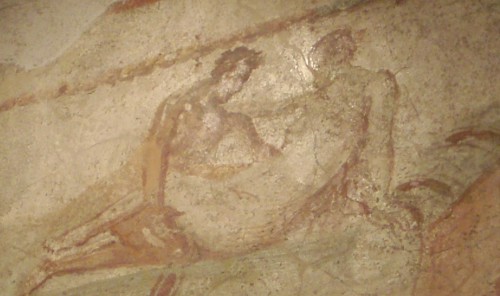 Yeah, you're seeing what you think you are seeing. This is one of the least risque of the many murals. These guys used phallic symbols as directional arrows on their walls and pavement.

They went to the final level of doctor when there was nothing left to do but chop the thing off. Our guide then suggested, in his thick Italian accent, "You know, like America's Lorena Bobbitt" and everyone giggled.

I was standing in the back of the crowd, where the tall people always end up. I can never resist an opportunity to make folks laugh, so I said, "Do you know what they call Lorena Bobbitt in Russia?"

Everyone turned around and looked at me. (I wasn't expecting that, I don't much like being the center of attention.)

"They call her Lorena Kutachunkoff." The group roared! I've now made people laugh on two continents! For the remainder of the tour, the guide would occasionally sidle up to me and ask, "how you say?" and I would repeat Kutachunkoff. "Ah, yes".

This happened several times before then end of the tour. Finally a fellow with a New York City accent spoke up. He said, "Hey buddy, if you're going to steal her material, the least you can do is refund her the cost of the tour!"

So, if by chance you end up in Pompeii, with a tour guide who tells you about Russian Lorena, would you let him know I'm still waiting for my check?﻿