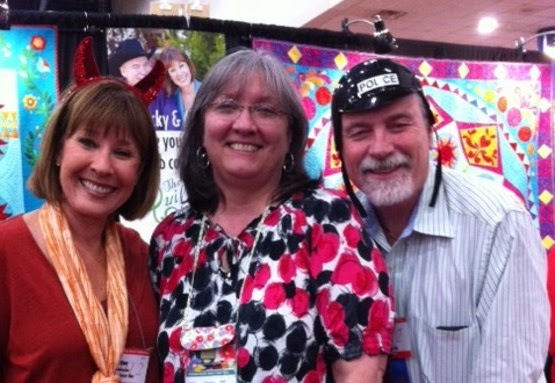 It's finally After Market. All of the weeks of preparation have paid off, and I was successful with my Schoolhouse and Take & Teach events. Well, at least all of the folks to spoke to me afterward told me I did a great job. If someone was unhappy they chose not to share that with me. Works for me!

Market is a funny thing. In a lot of ways it is all business, all the time. There are formal times to "see and be seen", in lectures and workshops. And, then again, I've had some of my best opportunities presented at a chance meeting over breakfast. You just never know who you might be sitting with.

I'm finally learning that, while good things happen when I'm being a serious, grownup businesswoman, some of my best opportunities have popped up when I was totally off, and just being my silly self.

When I went to my first quilt market (in 1997), I was a shy housewife quilter, with a "line" of six patterns. I was totally star struck. All around me I saw the television quilting stars just walking around like regular people! Now I can call some of them good friends. (But standing between Alex Anderson and Ricky Tims gives me the giggles!) 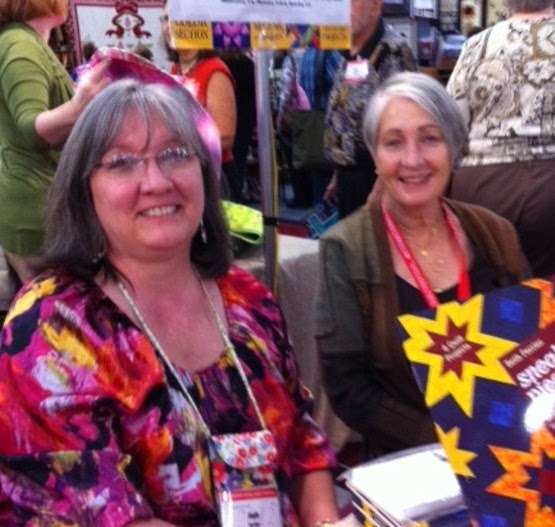 To promote the new book, I was scheduled for two book signings. The one at market was for free copies. The line was pretty long when I showed up, great ego boost for sure. But the moment the numbers for the freebies were distributed, most of the folks disappeared, a much needed humbling experience. Market is full of highs, when folks actually get star struck with me (who knew?). And then there are the reality checks, when you realize that all the folks lined up for your demo are actually waiting for the next free book signing. Sigh.
One of the many highs of this trip happened at Festival, the retail show that follows market. At a book signing where people actually purchase the book (where the real honor lies), I was seated next to Sandra Dallas! Yes, that Sandra Dallas. For someone who keeps saying she wants to write a grown up book (no pictures), I was star struck once again. We didn't have much time to chat, which was sort of a good thing, since we were busy signing (and selling) books. But Sandra was lovely, and interesting, and gracious. Having learned how much fun it can be to have folks fawn all over you, I did everything but kiss her ring. (And I would have, if she had offered her hand. Better yet, I bought her two newest books and she signed them!)
This market was pretty fantastic for me. I may have several new opportunities to work with magazines. A couple of teaching venues may come knocking. Relationships with my favorite manufacturers were cemented. All that good business, and, it was like old home week. Celebrating with friends who are doing well, commiserating with some who are struggling. And generally laughing my face off for seven days.
Posted by Beth Ferrier at 9:21 AM