Now showing on the Baby Wolf 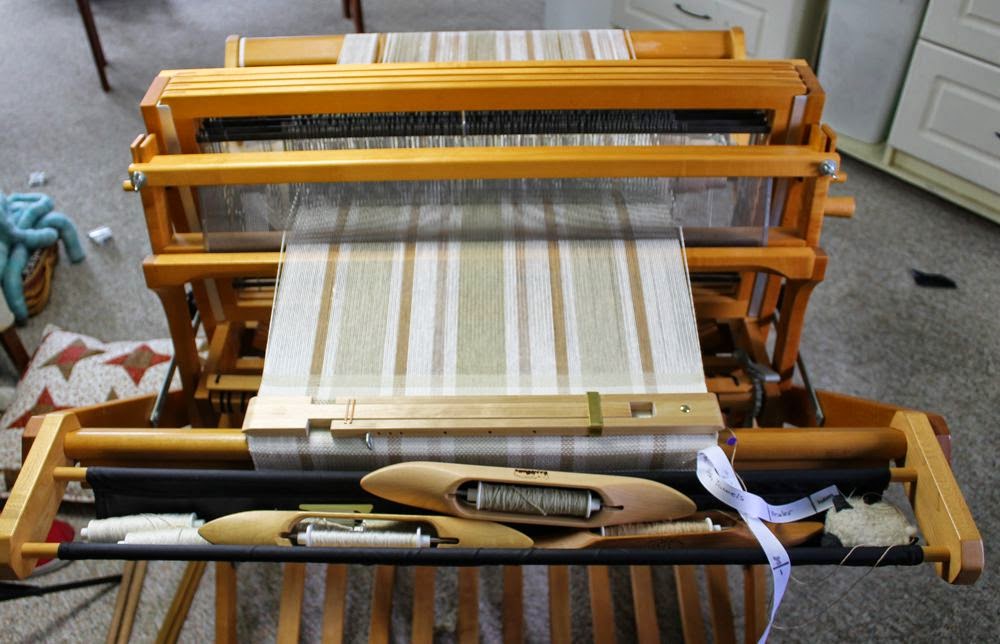 This is my Baby Wolf loom. It's smallish, with a weaving width of only twenty-six inches. The position of the warp threads, the ones on the loom, are controlled by shafts, frames of wire strands (heddles) through which the warp is threaded. Patterns are decided, in part, by through which heddle and shaft the thread is passed. With only four shafts, I think of this as my starter loom. 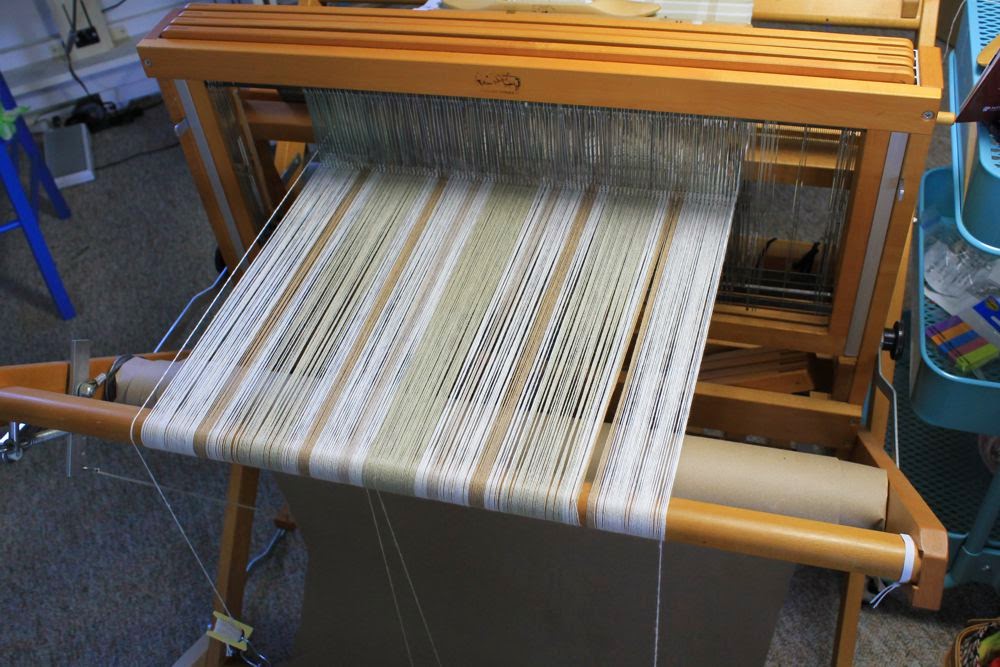 Right now I have it warped with cotton yarn for dish towels, which will (hopefully) become Christmas gifts. (I've you're on my gift list you might want to look away now.) It's really cool thread, called American Maid (from Lunatic Fringe Yarns), it's totally grown and processed in the US. The colors you see are all naturally occurring, and are supposed to deepen with washing.


Putting this warp on the loom made me cry. Repeatedly. The thread is so soft that it fuzzed up and matted together as we tried to crank it onto the warp beam. I had wound a fifteen yard warp, hoping to make a whole passel of dishcloths, but we gave up at about ten yards and just whacked the last bit off. Ten yards will still make almost a dozen towels. 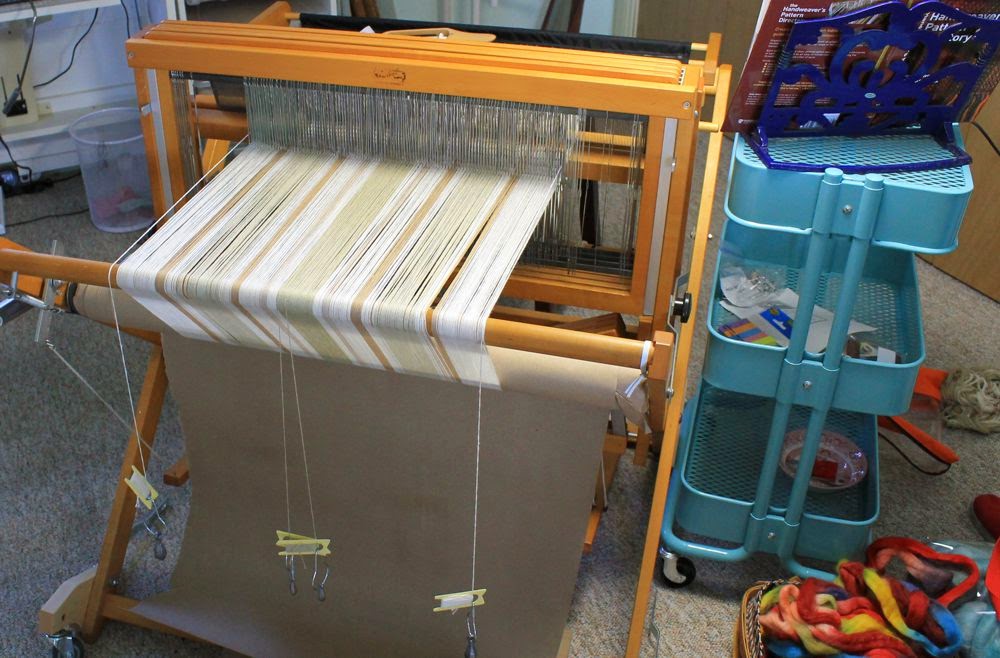 Those threads hanging off the back of the loom are to replace threads that broke in the warping process. The thread is wrapped around a knitting bobbin and a lead fishing sinker is attached with a shower hook to add tension.

I'm learning that pretty much everything has a hard part that needs to be done well, and it usually comes early in the process. Babies need birthing, applique needs templates, quilting needs basting, and weaving needs a warp. It takes discipline and patience to get on with the hard parts, the patience part being the hardest for me. I have to admit to developing a new and specialized vocabulary for warping a loom. 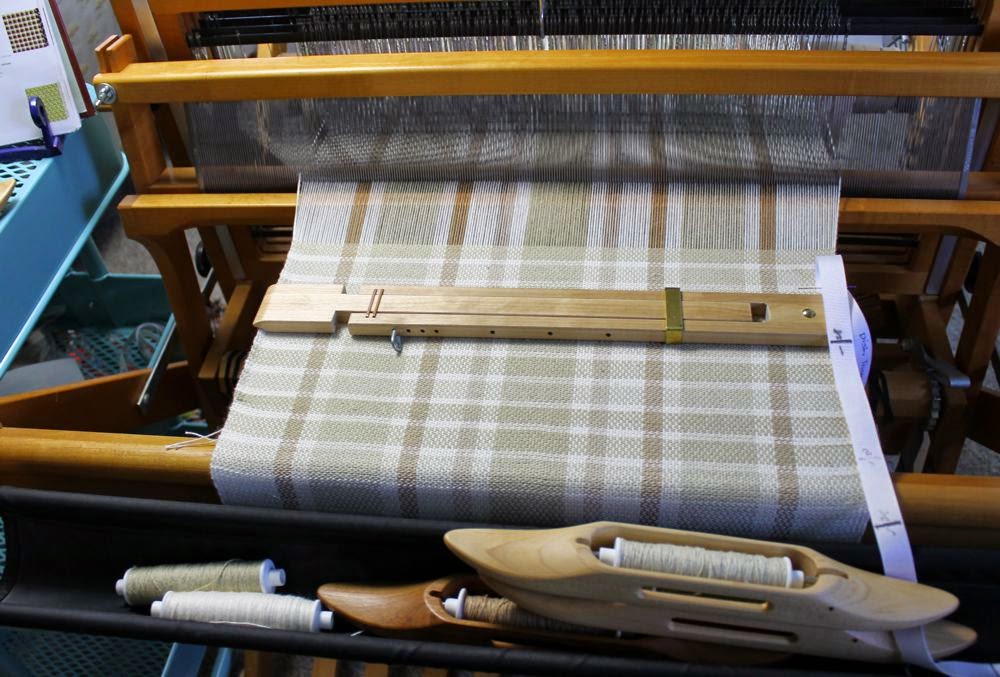 But then we weave. As I dance on the treadles the shafts pop up and drop down, creating pattern and texture as the shuttles fly by. It is this good part that makes me forget all about the bad part until the next warp comes along.