Just a couple of knots

So much has happened since I started this project that I couldn't remember if I had a plan for the center of the flowers. Well, that's not true. I know I had a plan. I always have a plan. Not remembering the plan meant that I needed to come up with one pretty quick.

I was fairly certain that wool was involved, so I started by cutting circles out of different colors of wool. I had to remind myself that testing isn't wasting, that it would be so much better to toss a couple of circles of fabric than regret dozens and hours of work too. 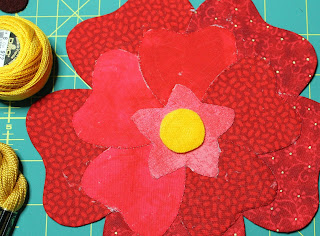 In the end I settled on yellow. I haven't used much yellow in the quilt so far, and it adds a nice sparkle. I tried different sizes, considered cutting star shapes instead of circles. But, in the end, the yellow circle ruled the day.

(I can't believe how much the glue shows in these pictures. I sure was sloppy with it. No worries, though, it will all be gone in the first wash.) 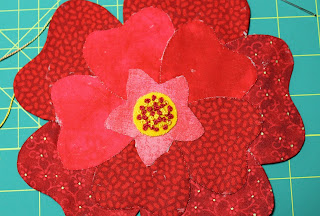 In the end it was really all about the french knots. They make me ridiculously happy. Using #5 perle cotton makes them look like fat and happy seed beads. Some how the plan (see, I did have a plan) changed from a simple circle of knots to a center full of knots.

All that is left for me to do is to make the bias strips and get to stitching all the parts and pieces to the backgrounds. Doesn't seem like much, does it, after coming so far?